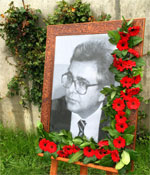 NCRI – The Iranian Resistance’s President-elect Maryam Rajavi announced today that the Swiss Investigative Magistrate, Jacques Antenen, had issued an international arrest warrant for Ali Fallahian, the clerical regime’s former Minister of Intelligence and Security, an advisor on security affairs to Supreme Leader Ali Khamenei and a member of the Assembly of Experts.

The warrant was issued because of Fallahian’s direct role in the assassination of Prof. Kazem Rajavi, a renowned human rights advocate and the representative of the National Council of Resistance of Iran (NCRI) in Switzerland.

In his decree addressed to all police officers and law enforcement forces, Judge Antenen, the Investigative Magistrate of Canton Vaud in Switzerland, ordered that they arrest "Ali Fallahian, former Minister of Intelligence and Security of the Islamic Republic of Iran and transfer him to the Canton Vaud Prison in Lausanne, Switzerland."

Mrs. Rajavi lauded the efforts of Stephane Rajavi, the elder son of Prof. Rajavi, and congratulated the issuance of the ruling to the late Prof. Rajavi’s widow, his other children and the families of the victims of the mullahs’ terrorism.

She added that this ruling was the first tangible indication of an end to the policy of not punishing the clerical regime’s officials for their terrorist crimes.

Mrs. Rajavi called on the Swiss government to set aside economic and political considerations and undertake all efforts necessary to implement the arrest warrant against Fallahian so that justice is carried out regarding the principals and perpetrators of Prof. Rajavi’s assassination.

The Iranian Resistance’s President-elect added that as is clearly evident in the case of Prof. Rajavi’s assassination, in addition to Fallahian, Khamenei and former President Akbar Hashemi Rafsanjani were directly involved in issuing the order for this criminal assassination. She expressed hope that following the arrest warrant for Fallahian, similar warrants would be issued for them as well.

Mrs. Rajavi noted that the mullahs’ leaders have been involved in dozens of assassinations of Iranian dissidents outside Iran as well as other terrorist crimes throughout the world.

The ruling by the Swiss Judge underscored "Investigations made it clear that 13 persons were involved in planning and carrying out the murder. All of them had service passports, marked ‘on assignment.’ A number of those documents had been issued on the same day in Tehran.”

Fallahian was the "Intelligence Minister of the Islamic Republic of Iran at the time of Prof. Rajavi’s assassination. The Ministry had close ties with the Islamic Revolutionary Guards Corps, especially the Qods (Jerusalem) Force" and "Minister Fallahian was responsible for assassinations and issuing the orders for all such missions."

Secretariat of the National Council of Resistance of Iran
April 8, 2006