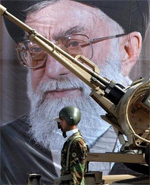 NCRI – This afternoon, the mullahs’ Supreme Leader Ali Khamanei threatened Western countries and the international community with terrorism, while claiming, “Their interests will be harmed wherever possible around the world.”

Also yesterday, Mahmoud Ahmadinejad, the mullahs’ President, stressed “We are a nuclear state, and we have the ‘A’ to ‘Z’ capacity to build nuclear technology,” adding that in case Security Council imposes sanctions, the regime will abandon Non-Proliferation Treaty (NPT).

Mr. Mohammad Mohaddessin, Chair of the NCRI’s Foreign Affairs Committee, said in this respect, “With these remarks, Khamanei is trying to prevent the international community and specifically the United Nations Security Council from adopting a firm policy, so that it could   acquire nuclear weapons without paying any price.”

Emphasizing that “experience, especially of the past three years, has shown that further talks or delay in adopting a decisive policy toward the religious dictatorship ruling in Iran, will push this regime closer to obtaining a nuclear arsenal,” Mohaddessin underscored the need  for the imposition of immediate and comprehensive sanctions against the regime by the Security Council.

He added, “The clerical regime will never abandon nuclear weapons because it considers them to be a strategic guarantee for its survival.  Therefore, the definitive response to the mullahs’ nuclear threat is regime change and the establishment of democracy in Iran. By virtue of its vast popular base, the Iranian Resistance is capable of realizing this change.”

Secretariat of the National Council of Resistance of Iran
April 26, 2006