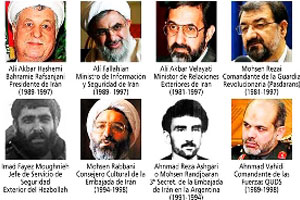 By Eduardo Szklarz for Infosurhoy.com
Groups helped the Lebanese militia Hezbollah carry out the 1994 attack against the Argentine-Israeli Mutual Association (AMIA) in Buenos Aires, according to report.
BUENOS AIRES, Argentina – Since the 1980s, Iran has been introducing intelligence cells into Latin America to recruit agents for terrorist attacks, according to security analysts and officials from the Argentine justice system.

This shadow army helped the Lebanese militia Hezbollah carry out the 1994 attack against the Argentine-Israeli Mutual Association (AMIA), which left 85 people dead.

In 2007, an Iranian cell in Guyana was planning to explode fuel tanks at John F. Kennedy Airport in New York, but they were stopped by U.S. security forces.

The data come from an investigation conducted by the prosecutor in the AMIA case Alberto Nisman, who accuses Iran of sponsoring and committing acts of terrorism in the region following the 1979 Islamic Revolution.

“The attack against the Jewish center in Buenos Aires was not an isolated incident,” Nisman said in a 502-page report filed with the court. “It exists in a larger context, developed as a result of a decision by the Iranian regime to ‘export the revolution,’ including through violence.”

In the report, which was released in May and was the result of nearly 10 years of investigations, Nisman states Iran has used mosques, embassies and cultural centers to carry out terrorism in Latin America.

The Iranian plan began in 1982, when a seminar was held in Tehran with about 380 clerics from 70 countries, according to the report.

“Iran has installed websites in the region to propagate extremist messages,” said Luis Fleischman, a Uruguayan professor of political science at the Harriet L. Wilkes Honors College at Florida Atlantic University, in the United States. “The troubling part is not that common people read these websites, but that the local Arab population, which has lived in peace with the Jewish community for more than a century, may become radicalized.”

The leader of the Iranian intelligence cell in the Southern Cone was the Shia cleric Mohsen Rabbani, who supplied logistical support for the Hezbollah attack against the AMIA, according to the report.

Rabbani entered Argentina in 1983 as a tourist and obtained permanent residency the following year. He claimed to be a representative of the Ministry of Agriculture of Iran, but he was, in fact, a member of the Ayatollah Khomeini’s Intelligence Bureau, the report states.

Within months, Rabbani controlled three Shiite mosques in Argentina: At-Tauhíd, in the neighborhood of Floresta on the south side of Buenos Aires; Al-Iman, in Cañuelas, in the province of Buenos Aires; and El Mártir, in San Miguel de Tucumán.

Witnesses in the case said Rabbani manipulated students, placing them in situations of economic dependence to infringe upon their intellectual independence.

“Young recruits were sent to religious centers in Iran, where they ‘received military training and political indoctrination from the Pasdaran (the Iranian Revolutionary Guard),’” the report states.

Those who did not accept the radicalization were segregated from the rest of the group. This happened with Lescano, who said he “stopped attending the At-Tauhíd mosque in 1990 or 1991 due to ideological differences” before he was denied entry.

Rabbani used newspapers and radio stations to attract followers. The intelligence outfit also relied on front companies, such as the Government Trading Corporation of Iran (GTC), which inspected meat slaughtered under Islamic precepts, and Imanco (registered as an import/export company), as well as radicalized members of the local Muslim community, known as “antennas.”

Rabbani’s activities extended to Islamic centers in Chile, Colombia and Uruguay, according to Nisman.

“The decision to attack the AMIA was made on Aug.14, 1993 during a meeting in the Iranian city of Mashad,” the report states.

Rabbani was in charge of buying the van that was packed with the explosives used in the attack. Four months before the attack, he was appointed cultural counselor of the Iranian embassy, ensuring diplomatic immunity, according to the report.

Nisman found that Rabbani exchanged several phone calls with Colombian citizen Samuel Salman El Reda, who coordinated the work of the terrorists from the Brazilian city of Foz do Iguaçu, in the Triple Border Area.

An international arrest warrant has been issued for Rabbani, but he lives in Iran and is protected by the Islamic regime, Nisman said.

Previous article
Woman wanted in US detained in Mumbai arriving from Iran
Next article
Iran: Second nuclear power plant to be built in Bushehr next Iranian year