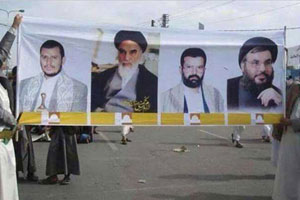 Injured Houthis are transferred to hospitals in Tehran and Mashhad

Brigadier General Esmail Qa’ani, Deputy Commander of the terrorist Qods Force, acknowledged that the militias affiliated with the Iranian regime in Yemen have been trained by regime’s Revolutionary Guards (IRGC). “Those defending Yemen have been trained under the flag of the Islamic Republic” and “the enemies are incapable of confronting Yemeni fighters,” he said (IRIB News Website – May 23).

The number of the injured is so great that the Imam Reza Hospital of Mashhad refuses to accept patients from the city of Mashhad. Once treated, the injured Houthis are transferred to Qasr Talaei Hotel in Imam Reza Street which belongs to the IRGC.

The Security and Anti-Terrorism Committee of the National Council of Resistance of Iran issued a statement on May 2, 2015 regarding the transfer of injured Houthis to Iran disclosing: “Up until the Arab coalition, injured Houthis were regularly transferred to Iran. Including on March 23, the QF airlifted 52 injured members of Ansarullah to IRGC Baqiyatollah Hospital in Tehran. IRGC General Qa’ani personally paid a visit to them at the hospital.”

Five Houthi commanders who had been transferred to the IRGC hospital in Tehran died and a number of them who were discharged from the hospital were being taken by Mahan Airline to Sanaa on April 29, but, the Arab Coalition prevented this flight from landing in Sanaa. IRGC had sent this plane under the cover of sending Red Crescent aid to Yemen.

Secretariat of the National Council of Resistance of Iran
May 25, 2015