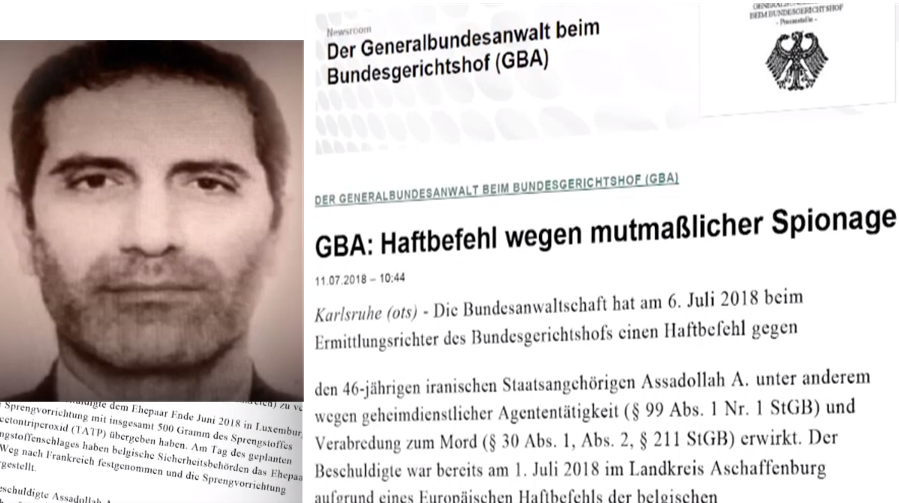 Iranian regime’s offices in Europe should be shut down, and its intelligence and Quds Force agents should be expelled

The German Federal Prosecutor announced in its statement on July 11 that German judiciary had ordered the arrest of Assadollah Assadi, a mullahs’ terrorist diplomat, on charges of espionage and collaboration for murder.

He had previously been arrested on July 1 based on a European arrest warrant. According to the statement, Assadi had commissioned a couple residing in Antwerp in March 2018 to carry out an assault using explosives on the Iranian’s annual grand gathering in France on June 30, 2018, and gave them 500 grams of the explosive TATP in Luxemburg in late June. The statement added, Assadi was a member of the “Ministry of Intelligence and Security,” whose tasks “primarily include the intensive observation and combatting of opposition groups inside and outside of Iran.” It added that the German’s judiciary warrant would not hinder Belgium’s extradition request for the suspect.

Belgian security and prosecutors previously described the two arrested terrorists in Belgium as one of the regime’s sleeping cells that had been directed by Assadi for many years (De Standaard- July 4th), and a Belgian judicial spokesman said, “Practically all employees of Iranian embassies are part of the Iranian Secret Service.” (NBCnews.com- July 6th).

According to reliable intelligence from inside the regime, this terrorist act was decided months ago by Iran’s supreme leader, the president, foreign and intelligence ministers, the secretary of the Supreme National Security Council, the Revolutionary Guards, the Quds Force, the IRGC’s intelligence Organization, and the deputy for political-security affairs of Khamenei’s office. The Ministry of Intelligence and Assadollah Assadi, the MOIS station chief in Austria, were assigned to carry out the operation. Since a few years ago, the MOIS station in Vienna had become the coordinator of the MOIS stations in Europe.

Assadi is one of the MOIS’s veteran agents who was stationed in Vienna since 2014 under the guise of a Third Counselor. His office was at room No 200 on the third floor of the embassy. His main task was espionage and conspiracy against the People’s Mojahedin Organization of Iran (PMOI/MEK), and he has been traveling to various European countries in this regard. Before Assadi, Mostafa Roodaki was in charge of the MOIS station in Vienna. Roodaki was first transferred to Tehran and then in 2017 he was dispatched to Tirana in order to engage in conspiracy against the PMOI in Albania.

In fear of the consequences of the exposure of its terrorist operation against mass number of innocent civilians, and paranoid about the revelations of its other terrorists, the mullahs’ regime seeks to see Assadi would be extradited to Austria and subsequently be transferred to Iran. As such, the clerical regime has resorted to intimidation, blackmail and offering concessions. This is while this terrorist diplomat was active in the preparation for a crime against humanity at the heart of Europe and was directing it.

During their visit to Austria last week, Rouhani and Zarif met with Austria’s former minister of defense, who has had a very active and close relations with the mullahs’ regime since years ago, in order to have him take the lead to try to free Assadi. The regime’s foreign ministry has claimed in its internal reports that the Austrian government is willing to close the case quickly and will utilize its resources for this purpose.

Iranian Resistance warns against the regime’s attempts to divert the investigations and to help its terrorist diplomats in general, and Assadi in particular escape the justice, and calls for the closure of regime’s embassies and representative offices, and the expulsion of terrorist diplomats and the MOIS and Quds Force agents. This is in accordance with the decision of the Council of Europe on April 29, 1997, which stipulated that the mullahs’ mercenaries and intelligence and security agents should be expelled from European Union Member States and not allowed to enter EU Member States.

The Iranian Resistance reiterates on the need to disclose and publish all details of the terrorist attack against the grand gathering of Iranians. Public awareness of these details is essential for securing the security of the Iranian dissidents and refugees in particular, and the security of Europe in general.