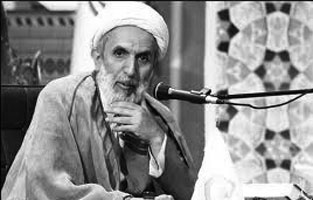 •Syria is Iran’s 35th province. The Syrian Bassij was established with 60,000 Hezbollah members.

•If the enemy seeks to take over Syria or Khuzestan, Syria would be our priority. If Syria is lost, we won’t be able to hold Tehran.

NCRI – The criminal mullah Mehdi Taeb, among Khamenei’s inner circle and the head of the so-called “Ammar Headquarters” repressive entity, admitted that the clerical regime’s sheer existence depends on the Syrian dictatorship.

“Syria is the 35th province and a strategic province for us. If the enemy attacks us and seeks to take over Syria or (Iran’s) Khuzestan, the priority lies in maintaining Syria because if we maintain Syria, we can take back Khuzestan. However, if we lose Syria, we won’t be able to hold Tehran,” said Mullah Taeb on February 14th in a gathering of university Bassij units.

“We are now involved in Syria and our front line is there. In this front we are standing against all arrogant forces… Syria had an army but this army was not able to manage the war inside Syrian cities. Therefore, Iran suggested establishing urban Bassij units to run the urban warfare… Syria’s Bassij was established with 60,000 Hezbollah members and they took over the war in the streets from the army,” he added.

Taeb is one of most criminal members of Khamenei’s inner circle, the head of the Ansar Hezbollah club-wielders, and one of the main elements behind repression inside Iran, especially during the 2009 uprising. He is now head of the repressive organ named “Amar Headquarters” that is missioned to run the “soft war” and confront “cultural invasion”. A number of the most hideous mullahs and Revolutionary Guards members such as Saeed Ghassemi, Hosseinollah Karam, Mehdi Mandegari, Mehdi Kuchakzadeh, Hamid Rassaie and Ravanbakhsh – all senior elements of the regime’s repressive units and club-wielders – are among the members of this repressive organ’s central council.

Prior to this Khamenei had emphasized that “Syria is the strategic front line for the regime“. Therefore, despite all the hardship and complicated circumstances, they should not lose hope and must support Assad to the end.

Khamenei advisor Ali Akbar Velayati described Syria’s dictatorship as the “golden ring of the resistance” and added, “Had Syria not provided Hezbollah logistical support, Hezbollah would have not been victorious in the 33-day war and neither Hamas in the 22 –day war. Syria has a very fundamental and key role in the region for the policy of resistance to advance firmly or become shaky. Therefore, aggression against Syria is considered aggression against Iran and Iran’s allies.” (Iran’s state-run media – 26 January 2013)

Shocking confessions made by Mullah Taeb and other senior Iranian regime officials emphasize more than ever the necessity of the international community’s immediate action to stop the comprehensive intervention by the mullahs’ regime, the IRGC and the Quds Force in the Syrian people’s massacre, which are a flagrant violation of United Nations Security Council resolutions.