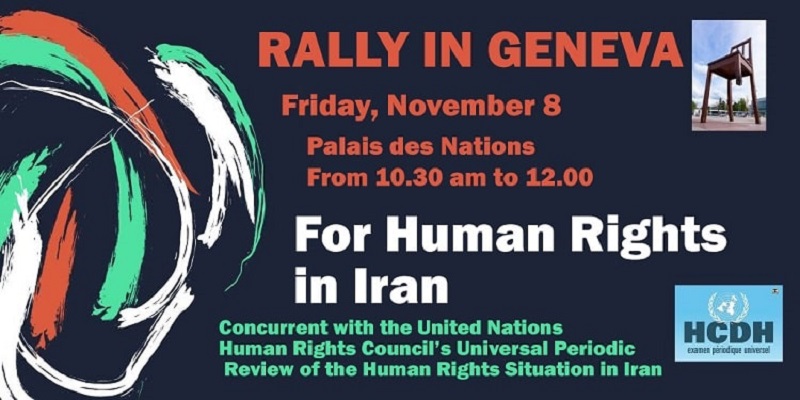 Written by Mahmoud Hakamian on 06 November 2019.

Supporters of Iran’s main opposition group, the People’s Mojahedin Organization of Iran (PMOI, Mujahedin-e Khalq or MEK) will hold a rally outside the United Nations European headquarters in Geneva later this week, simultaneous with the UN Human Rights Council’s Universal Periodic Review of the human rights situation in Iran.

MEK supporters will gather on Friday, November 8, 2019, outside the Palais des Nations, to condemn the ongoing human rights violations in Iran and urge the international community to hold the regime’s officials to account for their crimes and mass murders. Mass murderers currently hold top positions in the regime, particularly in its judiciary.

Ebrahim Raisi, the regime’s current Judiciary Chief, was a member of the notorious Death Commissions, which were responsible for the massacre of over 30,000 political prisoners in the summer of 1988. The majority of the victims of the 1988 massacre were members and supporters of the MEK. The regime carried out this crime based on a fatwa issued by the regime’s then-Supreme Leader Ruhollah Khomeini.

The protesters will demand an end to impunity for the perpetrators of the 1988 massacre. They will point out that if the criminals responsible for the 1988 massacre continue to enjoy impunity in Iran, the regime will continue its brutal crackdown on any form of opposition.

Iran’s regime holds the infamous record of the world’s top executioner per capita.

The UPR Working Group will review Iran among 14 other States, during its current session taking place from November 4 to 15.  Iran’s first and second UPR reviews took place in February 2010 and October 2014.

Numerous NGOs made the appeal to the @UNhumanrights chief during the #HumanRights Council’s 42nd session in Geneva.
The NGOs say it is time for the UN to investigate Iran's #1988massacre.