The People’s Mojahedin Organization of Iran (PMOI /MEK) announced on Monday, March 2, 2020, that as of 8:00 pm local time, the death toll nationwide from Coronavirus had exceeded 1000.

Over 1,000 people dead in Iran to the coronavirus, via Iranian opposition PMOI/MEK sources.

Over 1,000 people dead in #Iran to the #coronavirus, via Iranian opposition PMOI/MEK sources.
This tally is up to 8 pm local time on Monday, March 2.

Breaking: Number of deaths from COVID19 in Iran surpassed 1,000, according to MEK network.

At least 209 death in Tehran, 300 Qom, Isfahan 61, Gilan 92. Among the victims several MEK activists, Resistance Units members who were helping the victims.

#Breaking: Number of deaths from #COVID19 in #Iran surpassed 1,000, according to #MEk network. At least 209 death in Tehran, 300 Qom, Isfahan 61, Gilan 92. Among the victims several MEK activists, Resistance Units members who were helping the victims #CoronaOutbreak #irancorona pic.twitter.com/rpausDqxJe

Monday, March 02, City of Qom: in one section of Beheshteh Masoumeh cemetery 80 Coronavirus patients who have lost their lives have been buried. Tens more have been buried in group graves in other sections of the cemetery.

“We’ve been crying since day one that we have 594 Coronavirus patients, but the Ministry of Health was saying since you have no positive test, we are not giving you the necessary facilities! Until suddenly they announce that we have become an epicenter of Coronavirus.”

People pass out in the streets due to Coronavirus

Monday, March 02, City of Yekandi of Mahabad in Kurdistan Province. Footage of a person passed out in the street due to Coronavirus

A citizen from Kangan, southern Iran, on Sunday said: “At least five people were reported having coronavirus symptoms.

However, they kept a lid on these reports so that no one would be informed that this illness has reached our city, too. However, everyone already knows, and authorities are preventing people from taking any footage.” 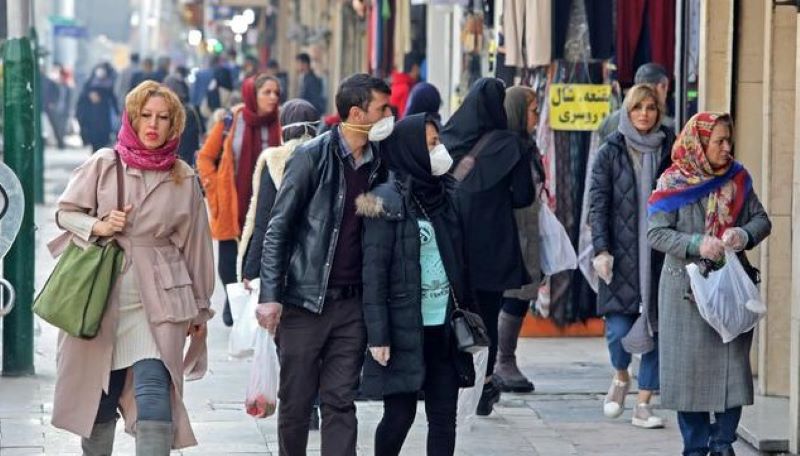 A citizen from Hashtgerd, northern Iran: “None of the pharmacies have gloves, masks, rubbing alcohol or hand sanitizing gels. Authorities, especially plainclothes agents, have all the pharmacies and clinics under close supervision. Even the city’s medical center is taking no measures in this regard. All storeowners who have closed-circuit cameras have been ordered to inform authorities if anyone is seen taking footages. And, the state police are going around downloading all the footage of closed-circuit cameras in stores across the city.”

Iranian regime Deputy Health Minister acknowledges 60,000 people in Iran have been diagnosed with the coronavirus

In a shocking revelation, the Iranian regime’s Deputy Health Minister Ghasem Janbabaei acknowledged in an interview with state TV that over 12,000 people have been hospitalized after being diagnosed with the coronavirus and this is only 20 percent of the individuals who have tested positive for the COVID-19 virus.

Iranian regime Deputy Health Minister says over 12,000 people have been hospitalized due to the coronavirus, adding this is only 20% of those infected with COVID-19. This brings the tally of coronavirus cases in Iran to 60,000.#Iran#coronavirushttps://t.co/fIPJCHXkxb

Mar 2, 2020—Many people in Iran passing out in the streets due to coronavirus and the regime’s inaciton.

Number of victims of Coronavirus in Qom surpasses 300

At midnight, local time, the People’s Mojahedin Organization of Iran (PMOI/MEK) quoted reliable hospital sources that the number of fatalities in the city of Qom exceeds 300.

Mrs. Maryam Rajavi, the President-elect of the National Council of Resistance of Iran (NCRI) extended her most profound condolences to the Iranian people, particularly the residents of Qom. She called on the world community to voice sympathy with the people of Iran and to take urgent action to save the lives and well-being of the people of Qom.

With utmost regret, the number of victims of #Coronavirus (Covid-19) in Qom has been rising quickly. My condolences to the people of #Iran and esp. the dear people of #Qom. I urge the international community to help save the lives and health of the Iranian people. #COVID19

Regime engages in deception to counter public; emphasis must be put on the need to stage strikes and protests as much as possible.

Some 150 victims in Tehran, 46 in Isfahan, 23 in Gilan, 18 in Lorestan and 45 in Kermanshah provinces have died So far. Additionally, 14 in Mashhad, 11 in Sorkh Hesar and at least 150 in Qom have also lost their lives. In other cities, including Ahvaz, Karaj, Andimeshk, Iranshahr, Bandar Abbas, Saqqez, Orumiyeh, Ilam, Tabriz, Saveh, Arak, Yasuj, Hamedan, Neyshabour, Semnan, Yazd, Qazvin, and Kashmar anywhere from one to several people have died.

Monday, March 2, 2020, marks the 109th day since the beginning of the nationwide Iran protests.

Previous articleIran Coronavirus Outbreak: Thousands Infected, Over 650 Dead, yet No Action by the Regime
Next articleNumber of victims of Coronavirus in Qom surpasses 300