As the coronavirus continues to claim more lives in Iran, reports from Iran indicate that instead of taking necessary measures, the Iranian regime, in line with its criminal cover-up and downplaying of this crisis, has declared an unofficial martial law across Iran.

Reports and footages from Iran, obtained by the People’s Mojahedin Organization of Iran (PMOI, Mujahedin-e Khalq or MEK), show the Iranian regime dispatching military troops to different parts of Iran to counter possible public outrage over the regime’s inaction in the face of the coronavirus outbreak which has thus far claimed the lives of over 4,900 people.

Brig. Gen. Gholamreza Jalali, head of the regime’s Passive Defense Organization, said on Sunday: “Beyond external threats, domestic threats, such as riots, revolutions, coups, famines, and pandemics can also endanger the security and stability of a state, causing its disintegration.”

Terrified of a possible public outrage, to somehow control protests and continue its inaction in helping the Iranian people, the regime is using the coronavirus outbreak to imprison people in their homes by imposing an unofficial martial law. On Tuesday night the people will celebrate Charshanbe Suri, an Iranian festival celebrated on the eve of the last Wednesday before Nowruz (the Iranian New Year). Usually people use this opportunity to stage protests against the regime using fireworks and fire to confront suppressive forces. Following the recent events Iran, from the nationwide Iran protests with over 1500 martyrs in November, the general boycott of the regime’s sham parliamentary elections, the coronavirus outbreak and the regime’s unprecedented international isolation, the Iranian regime is much more closer to its downfall and any uprising in the scale of the November Iran protests would end its rule. Therefore, the regime is more terrified of a popular uprising than the coronavirus and its impacts on the Iranian people.

Footages published by the MEK show the regime’s 16th armored division from Qazvin being dispatched to Gilan province, northern Iran, where over 657 people have lost their lives due to the coronavirus outbreak and regime’s inaction and cover-up, which has caused social outrage.

In a similar development, and to counter growing public outrage over the regime’s criminal cover-up and inaction, the regime’s supreme leader Ali Khamenei assigned Chief of the Staff of the regime’s Armed Forces, Revolutionary Guards (IRGC) Major General Mohammad Bagheri, to form a “health command center” to prevent and treat Corona. Yet, the regime’s real purpose is to prevent popular uprisings and protests.

On March 13, after the first meeting, Bagheri unveiled Khamenei’s repressive intentions and said: “Our law enforcement and security committee, along with the interior ministry and governors will start evacuating shops, streets and roads … this will be organized in the next 24 hours.”

Reacting to this repressive scheme, Mrs. Maryam Rajavi, the President-elect of the National Council of Resistance of Iran (NCRI), said: “These futile efforts will intensify the Iranian people’s anger and hatred over the despicable and oppressive velayat-e faqih system, which has done nothing but committing murder and plundering people’s wealth over the past 40 years. The Iranian people have stated unequivocally “our enemy is here” and “Khamenei and Rouhani are our Coronavirus.”

Khamenei’s claim about the possibility of a “biological attack” is an unprofessional hoax intended to step up their plans for clampdown on society. These desperate efforts only add fuel to the Iranian people’s anger and abhorrence towards the ominous clerical dictatorship. #Iran

While in other countries, which are grappling with the coronavirus pandemic, the Governments and armed forces are at the service of people to control this virus, in Iran the Iranian regime uses military forces to oppress people and thwart a possible uprising.

These remarks once again confirm the regime has no intention of helping the Iranian people and instead tries to avoid its imminent downfall by oppressing people and using military force. 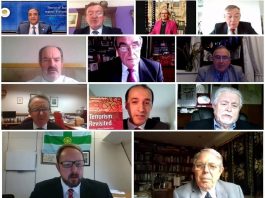 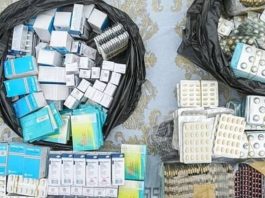 While Whining About Sanctions, Iran’s Regime Smuggles Medicine To Iraq 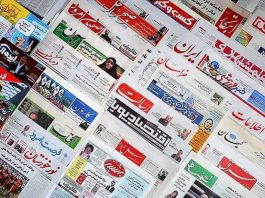