Andrew Card: State Department should say the MEK is not a terrorist organization and they should be delisted 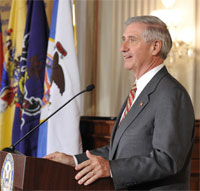 NCRI – On Saturday December 10, on the International Human Rights Day, and on the eve of U.S. President Barack Obama’s meeting with Iraqi prime minister Nouri al-Maliki in Washington DC, in a call to President Obama, American and European dignitaries urged annulment of the December 31 deadline on Ashraf and the forcible relocation of its residents inside Iraq, warning of an impending massacre and human catastrophe in Ashraf. (Video Clip)

Below is speech by  Hon. Andrew Card:

Thank you very much.  Madame Rajavi, distinguished panelists, ladies and gentlemen who care an awful lot about Camp Ashraf, next week the United States celebrates the 220th anniversary of the adoption of the Bill of Rights to our Constitution.  One of the greatest human rights documents in the history of the world.  It allows me to practice my faith, speak freely, to gather with people who share my concerns, allows me to petition government, it allows for freedom of the press.  That anniversary probably will not be celebrated very much in the United States, but it is something that would very much like to be celebrated in Camp Ashraf.  Next week, President Obama will be meeting with the prime minister of Iraq. 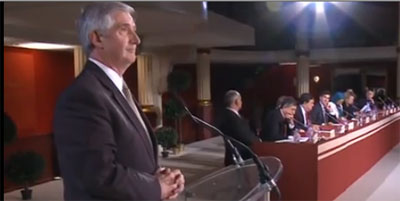 There are many reasons that the people of Camp Ashraf deserve to be protected.  There are powerful people, not powerful by might but powerful by example, by courage, by empowering women, by respecting rights, by inviting freedom, by allowing speech, by recognizing all faiths, by calling all people as having rights and benefits, not just a select few.  The people of Camp Ashraf have demonstrated commitment.  They overcame the cynicism of a U.S. government when we were skeptical of their commitment to be allies in the war on terror.  When we were skeptical that they would not lay down their weapons, in fact they turned them over.  They overcame the skepticism of the United States and the United States made a promise.  The United States has an obligation to keep its promise.

The United States also has an obligation to recognize I think a growing legal recognition that the MEK, the PMI, is not a terrorist organization.  The courts in the United States have spoken and challenged the State Department to make the decision.  And the decision is ripe.  In fact it’s overripe.  And it should be announced before Prime Minister Maliki meets with President Obama.  And the State Department should say the MEK is not a terrorist organization and they should be delisted.

Previous articleTargeting Ashraf residents with shotguns
Next articleGeneral Phillips: A cry must come out loud and clear that we will not stand for violence against the protected persons of Camp Ashraf, this deadline must be postponed