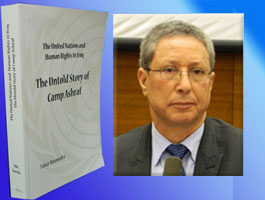 NCRI – A former senior United Nations official has published a scathing new book accusing the UN’s Iraqi envoy Martin Kobler of conspiring to destroy the Iranian opposition by moving them from Camp Ashraf to Camp Liberty.

Tahar Boumedra was the Chief of the Human Rights office of the UN’s Mission for Iraq (UNAMI) and adviser to Martin Kobler when the members of the People’s PMOI (MEK) were transferred to the Liberty ‘prison camp’.

He said the treatment of Liberty residents ‘could amount to a crime against humanity’ and blames his former boss for the abuses and deadly attacks inflicted on them.

He tells how Martin Kobler was appointed in the fall of 2011 and made it his priority to close Camp Ashraf.

He writes in his preface: “Ashraf residents were evicted from their 26 years place of residence and transferred to a new location in Iraq called Camp Liberty. The legality of this eviction and the transfer process were highly contested.

“A number of crimes against the inhabitants of Camp Ashraf were committed in both locations. Some of these crimes could amount to crimes against humanity.”

Mr Boumedra said he was forced to resign because UNAMI failed to uphold the rule of law and protect human rights in Iraq, and covered up for certain unlawful conduct of the Government.

He added: “Now from outside the UN system, I can avail myself to speak out to reveal the untold story. I do it to combat the silence observed towards the cruel, inhumane and degrading treatment inflicted on a defenceless population in Camp Ashraf and the extra-judicial killing committed against them in total impunity.”

In a forward to the book, Ambassador John Bolton describes the publication as ‘very timely, adding: “The ‘Untold Story’ is not about a tragedy or misconduct in the past, but about current failure of the international community to take the necessary measures to protect over 3000 Iranian dissidents residing in Camp Ashraf and Camp Liberty in Iraq.

“The book highlights how lack of knowledge, prejudice and misguided policy coupled with bad intentions and outright misconduct in some cases resulted in so much pain, and the loss of so many lives.”

Struan Stevenson, Presidents of the European Parliament’s Delegation for relations with Iraq in his endorsement of the book, said of the book: “Tahar Boumedra has revealed the shocking truth behind the failure of US, EU and UN policy in Iraq and worse still, the blatant connivance of senior UN officials in deliberately concealing facts from the West in their efforts to appease the corrupt and vicious Iraqi regime.”

And US lawmaker Patrick Kennedy wrote of the book: “This is a shocking story, revealing the systematic and deliberate distortion of facts by the UN mission in Iraq regarding members of the Iranian opposition.

“The author’s decision to resign from his post in the UN to unveil some of the most deplorable practices conducted under the name of the United Nations is commendable. This is a must read book.”