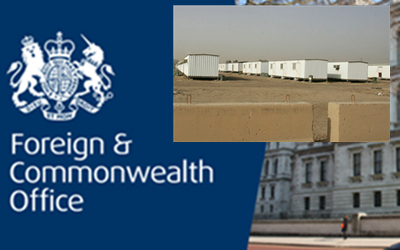 NCRI – The United Kingdom’s Foreign and Commonwealth Office has in its seasonal update to its Human Rights and Democracy Report highlighted the plight of members of the main Iranian opposition group People’s Mojahedin Organization of Iran (PMOI or MEK) in Camp Liberty in Iraq.

“On 29 October, rockets were fired at Camp Liberty, a temporary transit location for members of the Mojahedin-e-Khalq, killing 24 residents and injuring others. FCO Minister for the Middle East, Tobias Ellwood, condemned the incident and called on the GOI to bring those responsible to justice. Officials at the British Embassy in Baghdad raised this issue with the Office of the Iraqi Prime Minister to make clear the need for an urgent and comprehensive investigation into the incident. On 11 November, the UK’s Deputy Permanent Representative to the UN in New York underlined our concerns in the Security Council and to the Iraqi Permanent Representative. The GOI has begun an investigation, which we are following. We continued work with the UN High Commission for Refugees which is assessing applications made by residents for relocation.”

Previous articleAfghans protest murder of Setayesh Ghoreishi in Iran
Next articleUK: Human rights abuses in Iran are of “great concern”