Call by prominent personalities from U.S. and Europe – In a cross-Atlantic conference in Paris 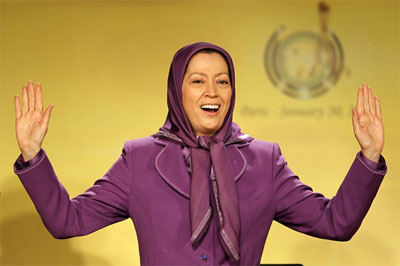 In an international conference held in Paris on Friday, January 20, at the invitation of the CFID (French Committee for Democracy and Human Rights in Iran), distinguished American and European dignitaries warned of the compulsory transfer of Ashraf residents to Camp Liberty that the Iraqi government is turning into a prison. While the conference censured Iraq for the continuous breach of its obligations to the United Nations and the United States, including violation of the Memorandum of Understanding (MoU), it expressed its concern of Iranian regime’s conspiracies to defeat the peaceful resolution to the Ashraf crisis. The conference called on the UN, U.S., and the EU to adopt urgent action to break the Iraqi-shaped deadlock and revitalize the peaceful solution. Speakers denounced maintenance of the illegal terrorist tag on the PMOI/MEK by the U.S. State Department iterating that this unjust label that faces a broad opposition in U.S. and worldwide, is the principal element in the massacre of Ashraf residents and the main obstacle to residents’ relocation to third countries which makes the U.S. all the more responsible for the situation in Ashraf. 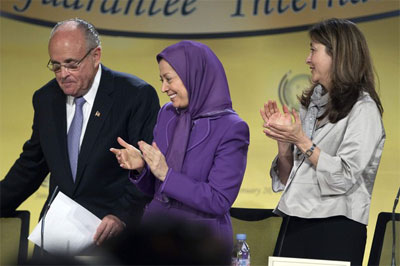 Mrs. Maryam Rajavi, the keynote speaker of the conference said: “Unfortunately the western governments and in particular the United States continues its policy of appeasing the religious fascism ruling Iran. At the core of this policy is the insistence to illegitimately label the PMOI. As long as this label exists, the clerical regime is assured that its threats against the world and regional peace and security would not face any staunch reaction. In this viewpoint, it is merely a deception and illusion that a policy that enchains the main and the most organized opposition of this regime may at the same time demonstrate resoluteness against this regime.”

Mrs. Maryam Rajavi added: “Today, sanctions against the mullahs’ regime have evolved to an international will. We have continuously welcomed sanctions, especially the boycott of the central bank and sanctions on oil, although we know well that to contain the nuclear threat of this regime, these sanctions need to be accompanied by support for the Iranian people’s struggle for a regime change. Despite, the decision by the EU and legislations by U.S. Congress and Senate to prohibit oil trades with this regime is a sizeable stride in the right direction. However, the policy of engagement by the present U.S. government and hesitations on behalf of western governments weakens these decisions and postpones them to the greatest extent with a viewpoint not to irritate this religious fascism in any adoption of policies.

Rectifying this policy starts with its key part which is putting an end to this same illegal designation. This designation has so far been the pretext of two massacres in Ashraf and many other executions in Iran. Rectifying this catastrophic policy would serve the peace and security of the whole world in addition to the Iranian people.”

With regard to the safety and security of Ashraf residents, Mrs. Rajavi said: “Now, before we lose time for realizing a solution, we warn that the mullahs’ regime and the Government of Iraq are busy making a dangerous abuse of the UN bodies to transfer the Ashraf residents from a threatening situation to a disastrous one. The trust in the United Nations should not turn into a lever for setting up a prison inside a garrison following the GoI’s enticements. The world is witnessing that the GoI neither wants nor is able to live up to its pledges to the UN and the international community. However, the main question is why the UN has kept silent in this regard?

The UN has been given the highest trust and the most authority and hence the biggest responsibility in this case. Therefore, it should not disclaim its responsibility when it comes to the GoI’s destructive policy.

Five months after each and every resident of Ashraf has submitted his or her application, the UNHCR should not delay the refugee status determination process any longer. Ashraf residents’ emergency condition and the GoI’s hindrances makes it necessary for the UNHCR to follow the collective determination process for the residents. This is an inevitable step to guarantee safety and security of Ashraf residents against various irrepressible threats.”