Gunter Verheugen – Camp Liberty is not like a waiting room for a short stay, it has all the elements of a prison 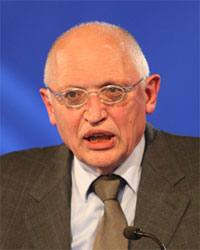 Gunter Verheugen – March 24, 2012 Paris – Thank you, thank you.  Madam President, honorable guest speakers, dear friends and supporters of the residents of Camp Ashraf, and unfortunately Camp Liberty as well, I suppose that everybody here will share my feelings that they could think of many, many other more enjoyable opportunities to spend a beautiful spring afternoon in one of the most beautiful cities of Europe in Paris than to attend a political rally.  But as disappointing and deplorable it might be that we cannot celebrate and cannot enjoy ourselves this afternoon, it is indispensable, indispensable that we raise our voice again and again and tell the rest of the world what is happening in Iraq, what is happening on the ground, what is happening with the people of Camp Ashraf.  I was asked by a German journalist a couple days ago why we are doing this.  And they believed this is a pointless exercise.  My friends, standing up for and defending the freedom, the rights, the dignity of other human beings is never a pointless exercise.  It makes us human.  [applause]

At the many meetings we have already organized and the many meetings I have taken part they have also a very specific meaning and a very specific effect.  They put a spotlight on the scene in Iran and Iraq.  We put a spotlight on the scene on the ground and we make the world watching what is happening.  The effect is that a government in Iraq, that the mullahs in Iran cannot hide what they are doing.  The least that we have achieved is, and we have achieved that, is that it will be very difficult for them to repeat the crime, the terrible crime that we have seen on the video a couple of minutes ago.  Very difficult for them to repeat that.  Therefore it is important to remain vigilant and to repeat and repeat what we have to say.  To repeat and repeat what we have witnessed.  It is a kind of protection and a very important protection for those who are still in Camp Ashraf or those who are already in Camp Liberty.  I sincerely believe that without these manifestations and without your participation and your strong commitment our friends there probably would be already dead.

Now, it’s not only about raising awareness.  It is also about putting pressure.  Pressure on the decision makers everywhere, United Nations, United States, European Union.  I do not feel competent to discuss the policies of the United Nations.  I have my views about policy of the United States, but there are more competent people here to make comments.  I feel competent to say some words about the policy of the European Union and the member states of the European Union.  Twenty-seven member states representing 500 million citizens.  As a European I can only say I feel ashamed.  I feel deeply ashamed.  EU member states, the governments of the member states and you institutions avoid carefully clear statements, and they avoid carefully clear commitments.  They’re dragging their feet.  It is true what they are saying.  They do not run Iraq.  But they can say, “If you, the government of Iraq, if you do not stop to violate permanently the human rights of the people of Camp Ashraf, we will immediately stop to support you.”  [applause] Not a single Euro, not a single Euro from Europe’s taxpayers’ money should go to such a regime.

I wonder, I really wonder why you leaders are so lenient.  Europe is proud of being the birthplace of the whole idea of human rights.  This idea of human rights spread from Europe to other parts of the world, beginning with the United States.  That’s the reason why I believe that we have a much stronger obligation to defend human rights because it is our own heritage.  So based on that, let us tell the European leaders again, the PMOI is not a terrorist organization.  They are the democratic alternative, the only existing democratic alternative to the regime in Iran. [applause] The mullahs, the mullahs are going after the PMOI because for them a tolerant and democratic Islam is the most dangerous threat.  That’s the reason why they want to get rid of you.

The relocation from Camp Ashraf is not a comfortable resettlement.  It is a forced removal.  Camp Liberty is not the kind of waiting room where you stay for a short while before you continue your travel to your final destination.  We have already heard it several times.  It has all the elements of a prison.  Conditions in Camp Liberty do not meet international standards. And the people there have no other place, no other places to go.  Their freedom, their security and their dignity is taken away from them.  And the future is totally uncertain and I wonder whether they do have a future at all.  Because so far, we have only a few commitments from the international community to accept people from Camp Ashraf in their countries.

And therefore, I must really ask, are we asking too much if you ask the EU leaders, the heads of state and government of 27 European nations, at least to discuss and to deal with the issue?  I know they are preoccupied with an economic crisis and it’s really, really important.  And I’m going to make a really unfair comparison now.  I know it is unfair, but I make it nevertheless.  If they’re fine to spend days and days and nights and nights to rescue European banks and financial institutions and investors, do we ask too much if you ask them to spend at least 30 minutes to deal with the destiny of the people of Camp Ashraf?  Is that ask too much?  I don’t think so.  [applause] Do we ask too much if we expect from them at least, at least a humanitarian gesture?  Why don’t they offer people from Camp Ashraf safety in their countries?  We are not discussing mass immigration here.  We are discussing homes for 3,400 people.  In my country alone, in Germany, we have more than 5 million foreigners living, more than 3 million of them being Muslims by the way.  So what is the problem?

The fact that PMOI is still on the American blacklist is not an excuse for European leaders.  How often must so outstanding personalities from the United States explain us of the fact that PMOI is still on this list is not based on evidence but is based on political maneuvering.  So it’s not an excuse for Europe that the Americans do not change the policy.  The only reason which I can see why EU leaders are so passive is that they still do not want to upset Tehran.  And here I can only join those who say, you cannot negotiate this regime away.  You can’t.  The only possibility that we have is that the people of Iran themselves overcome the mullah regime.  And what we have to do, our role is certainly not to please the mullahs.  Our role is to support those who represent a free and democratic Iran.  [applause]