Howard Dean: US must protect Iranian dissidents in Camp Liberty 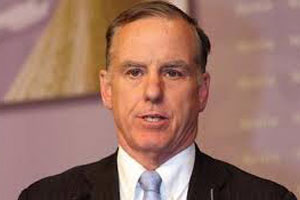 NCRI – The United States must keep its promise to protect the residents of Camp Liberty before they can be transferred to safe havens outside Iraq, former Governor Howard Dean has told a meeting at the US Senate.

Mr Dean also condemned Iran’s terrorist meddling in the Middle East and accused the US of sacrificing Liberty residents to keep Iran at the nuclear arms negotiating table.

He said: “These 3,000 people in Camp Liberty were disarmed by American troops in 2004 voluntarily in exchange for a piece of paper… that said these are protected people under the Geneva Convention and the Americans will take responsibility for protecting them.

“Now there is loose talk in the state department that our obligation ran out in 2009 when we turned everything over to Iraq. That is the kind of talk that we cannot have. That is the path to cynicism.

“You do not sell out 3,000 unarmed people because they become inconvenient, because you hope to pacify a group of people that do not have a history of keeping their word and who are as we sit at the table, killing Americans by supplying IED’s to Afghan Taliban.”

Former Vermont governor Mr Dean said he did not oppose an agreement with Iran – but not at the cost of 3,000 innocent residents of Camp Liberty, who have been subjected to repeated deadly attacks.

“We need to stand up to the mullahs. And if the mullahs today are going to break off these negotiations because we took 3,000 refugees into this country, than these are not the people we ought to be negotiating with.

“It is too late to do anything except to airlift these folks into the United States. Then they can be airlifted around the world.

“Give these 3,000 people their lives back, which we promised to do. That ought to be a condition of these negotiations, and we ought to not to sign any agreement until those 3,000 people are safe.”

Iranian refugees in Camp Liberty in Iraq are members and supporters of the People’s Mojahedin Organization of Iran (PMOI/MEK) who have been living in Iraq since over two decades ago in Camp Ashraf.