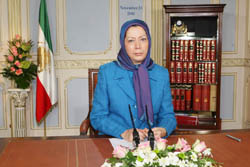 Following the inhumane pressures and atrocities perpetrated by the Iranian regime, their agents and the Iraqi Committee for the Suppression of Ashraf in the Prime Minister’s Office against the resident of Camp Ashraf in Iraq, an International Committee in Defense of Ashraf was established in the House of Lords in the United Kingdom.

Dozens of Peers took part in a parliamentary session on 23rd of November, presided by Lord Corbett of Castle Vale, Chair of the British Parliamentary Committee of Iran Freedom (BPCIF).

In a video address to the meeting, Maryam Rajavi reiterated, “Inhumane restrictions have been imposed on Camp Ashraf for the past two years and the harassment of the residents, including assaults on them, have been stepped up by Iraqi forces.”

Mrs. Rajavi presented a list of names of patients suffering from cancer in Ashraf and recounted some of the restrictions against, and mistreatment of, all patients, especially women. She described the medical deprivations as a humanitarian catastrophe.

Distinguished members of the Houses of Lords and Commons,

I salute you for your efforts in defense of the Iranian people and especially the residents of Ashraf.

Today, Ashraf is under enormous pressure.Inhumane restrictions have been imposed on Ashraf for two years. Daily harassment of the residents by Iraqi forces and beating them up has intensified.

Since the US forces left Ashraf in July 2010, at least seventy cases of harassment of the residents have been recorded.On three occasions, Iraqi forces attacked and injured 29 residents. Psychological torture of the residents has been continuing for the past nine months.Agents of the Iranian regime in cooperation with the Iraqi forces have set up 114 loud speakers, using them to threaten to kill the residents and destroy Ashraf.

They have deprived the residents of any peaceful environment which they very much need.Some of the loud speakers, installed next to the hospital, deny patients any rest even during the night.Patients are denied access to much needed treatment.Some cancer patients have suffered permanent harm because the Iraqis have not allowed them to have access to special doctors or hospital.

Two weeks ago, Iraqi forces prevented Ms. Elham Fardipour to go to hospital in Baghdad.She is suffering from thyroid cancer.She was waiting for this visit for several months. Her condition has reached the point of no return. Doctors in Ashraf have given up on another cancer patient simply because the Iraqis did not allow him to regularly visit a specialist doctor and receive the necessary medication.The health care in Ashraf is a humanitarian catastrophe.People are dying before the eyes of others simply because of the restrictions imposed by the Iraqi forces.

I call on all of you to do everything at you power to save the lives of the patients in Ashraf.I urge you to inform the public of the crimes being committed there. I ask you to call on NGOs and human rights advocates to mobilize public opinion in support of these patients.Urge the British government to take immediate and effective steps to facilitate the patients’ access to the necessary medical services. I would greatly appreciate all initiatives and organized actions in this regard.

Despite all these restrictions and the crippling siege, Ashraf has remained the focal point in the struggle for freedom.
Ashraf carries the message of persistence and unity in face of hardship. It inspires resistance to achieve freedom. PMOI members in Ashraf are paying a heavy price for the freedom of their people.The strength of Ashraf lies in its message, which has turned it into a source of inspiration for the Iranian people, especially the youths.

The mullahs are sparing no effort to destroy Ashraf.Not realizing that the message of Ashraf cannot be destroyed.Therefore, your defense of Ashraf while invaluable from a humanitarian perspective,  also amounts to defending the Iranian people’s resistance for freedom and defending the correct policy  vis-à-vis the religious fascism ruling Iran.

Experience has shown that this regime is neither willing nor capable of changing its behavior.Therefore, the only solution is democratic change in Iran.The Iranian Resistance is the driving force for change.It is now time for the British government to stand with the Iranian people.

I also call on the British government to play an active role in the protection of the residents of Ashraf.The principle of “Responsibility to Protect” or R 2 P, adopted by the UN General Assembly following the World Summit in 2005, obliges the international community, including the British government, to take urgent actions through the UN to prevent crimes against humanity.

Given its role in the coalition, the British government and the US have the obligation to take necessary measures to guarantee the protection of Ashraf residents.

Once again, I thank you for all your efforts in support of the Iranian Resistance.

Previous articleIran should keep out of affairs of Arab states: Egypt FM
Next articleDeclaration by 5,000 French mayors in support of the rights of Camp Ashraf residents