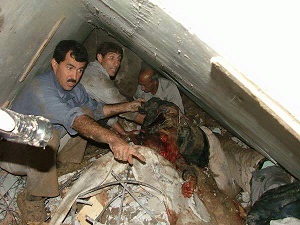 The International Parliamentary Campaign in Defence of Ashraf and Liberty (IPCDA) is appalled by the news this afternoon of the 4th deadly rocket attack on Camp Liberty, Iraq, that lead to 23 residents dead and scores of others severely injured.

The dire situation of Camp Liberty and the threat the residents are facing has been known to us since they were moved from Camp Ashraf in 2012. There were 3 previous attacks on Camp Liberty leading to death of 14 residents. We were promised proper investigation in all those attacks but the UN and the U.S. government have failed to live up to their promises. And when the perpetrators of such heinous acts were not held responsible, further attacks were certain to happen.

We have been warning the international community and particularly the UN many times. We call on the UN and the US government who are signatory to the quadrate agreement for providing safety and security of the residents of Liberty to take immediate action to:

1- Make sure the injured residents have full and immediate access to all the medical attention they need.

3- The UN refugee agency, the UNHCR, must immediately announce Camp Liberty a refugee camp under the protection of UN and remove all the Iraqi personnel who are responsible for constant harassment of the residents.

The UN credibility is seriously damaged in its handling of this case. It is time that the UN and US live up to their respective written, moral, and legal obligations.