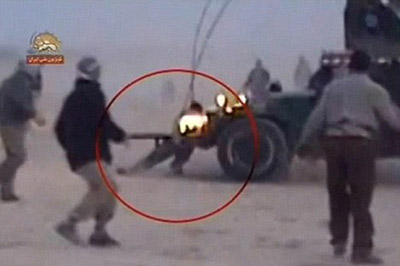 NCRI – April 8 marks the 5th anniversary of the massacre of Iranian opposition activists in Camp Ashraf by the Iraqi Army on the orders of then Prime Minister Nuri al-Maliki at the behest of the Iranian regime.

Eight unarmed and defenseless women, all members of the main Iranian opposition group People’s Mojahedin Organization of Iran (PMOI or MEK), were either shot at close range or crushed to death under the wheels of armored vehicles when Iraqi forces stormed Camp Ashraf, north of Baghdad, on April 8, 2011.

The Iraqi army assault on the defenseless camp residents last for six hours with armored vehicles’ heavy machineguns and snipers used to murder and injure the PMOI (MEK) members.

In all, 36 PMOI (MEK) members were massacred on that day. The group is the main enemy of the mullahs who rule Tehran today.

The brave PMOI members in the camp captured harrowing scenes of the brutal attack on film. The shocking images stirred international condemnation of the brutal massacre.

The United Nations High Commissioner for Human Rights at the time Navi Pillay condemned the Iraqi attack and said there must be a full, independent and transparent inquiry, and any person found responsible for use of excessive force should be prosecuted. No proper inquiry ever took place and no one was ever held to account in Iraq.

Many of those involved in the massacre continue to suppress the Iranian refugees now in Camp Liberty, Baghdad.

Previous articleMossack Fonseca worked with oil firms owned by Iranian regime despite sanctions
Next articleAmnesty: Iranian man to be imminently executed denied the right to appeal