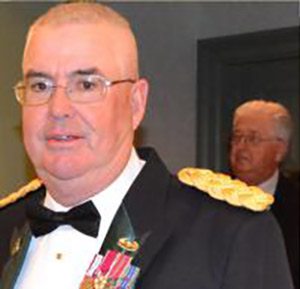 For all that the media talks about Iraq, there is too little discussion about the destructive role that Iran’s regime plays in keeping its neighbor in crisis, U.S. Colonel Leo McCloskey wrote in Townhall on Tuesday.

“One issue in particular that rarely gets enough attention is Iran’s fanatical hatred and animosity towards its opposition the People’s Mojahedin Organization of Iran (PMOI/MEK), which had stationed itself in Iraq after being exiled from Iran in the 1980s,” Col. McCloskey wrote.

“These Iranian exiles were confined by the US military in a compound called Camp Ashraf some 100 kilometers north of Baghdad. Living in Iraq for over two decades, they had very close relations with the locals and provided much assistance. However, neither Tehran nor its proxies in Iraq could tolerate their presence. As Commander of the Joint Interagency Task Force (JIATF) responsible for their protection I came to know the citizens of Camp Ashraf very well.”

“Not only did I become acquainted with their dedication to the cause of establishing freedom and democracy in Iran, I also became acquainted with them as individuals. I saw how their families from inside Iran and across the globe braved the dangers of Iraq and came to see their loved ones. I was also able to personally interview many of these visiting families when the Ashrafis welcomed me into their homes.”

“The conflict between the Iranian regime and the Camp Ashraf community has a long and varied history. Iranian agents first attempted to politically damage the community before violently attacking its residents. On July 7, 2015 the Huffington Post published an article by former French counterintelligence chief Yves Bonnet illustrating how the Iranian regime attempted through its agents to establish a close relationship with a French presidential advisor before the plot was exposed.”

“Bonnet named the Iranian Ministry of Intelligence (MOIS) agent as Mustafa Mohammadi and shed light on his conspiracy against the PMOI headquarters in Paris.”

“I hadn’t thought about Mohammadi for some time, but Bonnet’s article instantly reminded me of all the troubles he caused for us in Ashraf. He had sought to carry out a similar plot to mislead me by distributing false reports about the leadership in Ashraf abducting his daughter, Somaye and forcing her to remain in Ashraf. But Somaye personally convinced me that it was her own decision to remain with the Ashrafis.”

“Still, Mohammadi wouldn’t give up. He returned repeatedly, along with other members of the Quds Force and intelligence services, and they stationed themselves at Ashraf’s main gate, demanding to take back their relatives. They even went as far as installing 320 very powerful loudspeakers at various areas around the camp, blaring profanity and threats against the residents 24/7. My tour of duty in Ashraf had ended by then but I received constant reports about the psychological torture the Ashrafis were enduring at the hands of these agents.”

“Mohammadi and his associates claimed to be seeking visits with family members outside the borders of the camp, but they made no effort to enter the community peacefully for visits within. As it turned out, Tehran had declared that merely setting foot inside the camp would be considered a crime for any Iranian, punishable by imprisonment or even death.”

“Mohammadi and others continued their plot for nearly two years around Ashraf, legitimizing and paving the way for an attack by Nouri al-Maliki’s security forces against the unarmed residents of Ashraf in April 2011, leaving 36 killed and over 350 others wounded.”

“Recently, Iran’s Quds Force dispatched more such agents to Camp Liberty, a deserted former US military base that the UN and Iraqi government forced the Ashrafis to move into in 2012. The Iraqi government and the UN had promised that agents of the Iranian regime would not be allowed to maintain posts around Liberty as they did in Ashraf. Nevertheless, these so-called family members are now threatening to destroy Camp Liberty, echoing threats they’d issued prior to the deadly attacks on Ashraf.”

“The current activity just outside of Camp Liberty could portend another horrific massacre of innocent residents. If such a massacre happens this time, it will happen right under the nose of the UN and inside Baghdad, where the PMOI members are supposed to be protected by the Iraqi government.”

“My experience tells me that this is yet another sinister plot that cannot possibly have a happy ending. The Iraqi and US governments, UN and EU promised to protect these Iranian exiles. Unfortunately they have miserably failed to do so, as six attacks on Ashraf and Liberty have left more than 115 residents murdered and more than 1,000 others injured. It is high time that especially Washington and the UN live up to their promises. One very important step is to pressure the new Iraqi government under Haider al-Abadi to not play into Iran’s hands and not allow these so-called family members anywhere close to these vulnerable Iranian exiles. I for one will not and cannot forget these people who have devoted their lives to freedom and liberty. The time is now and we must act to save them before the Iranian regime launches another devastating attack on unarmed and defenseless people,” he added.

Col. Leo McCloskey was the Commander of the Joint Interagency Task Force (JITF), in charge of Ashraf Protection 2008-2009.