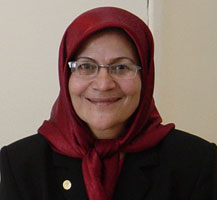 “I am a victim, they want us killed here”

Akram Habibkhani, a resident of Camp Liberty in a letter to UN High Commissioner for Human Rights : “I was the subject of a dirty psychological war by the Iranian intelligence ministry; it is part of an all-out conspiracy against residents of Ashraf and Liberty to justify the suppressive measures against them”

Text of the letter by Mrs Akram Habibkhani

Dear Madam High Commissioner:
Hoping every success for you in advancing human rights at the international level.

I am writing you as a 55 year old graduate of Mashhad University in Iran and my name is Akram Habib Khani. I am currently a member of PMOI living in Camp Liberty in Iraq.

Recently I was the subject of a dirty psychological war by the Iranian intelligence ministry and that is the reason I am writing this letter to you. I am certain that as the highest ranking authority on human rights and as a woman you will understand my situation well.

I began my political activities in 1977 as a supporter of PMOI and after the downfall of the shah I became a full time supporter of this organization. Since 1981, with the barbaric suppression of dissidents, especially members of PMOI, and mass executions by mullahs, I too was threatened with arrest and torture. Therefore, I resorted to clandestine living. After some time, many of my likeminded friends and students of Mashhad University had been executed and I was forced to leave Iran. To join my comrades to free my homeland, I travelled to France and with my ex-husband Esmaeil Vafa Yaghmaei whom I had wed in 1979, I became a refugee in France. Later in 1986 I moved with him to Iraq to PMOI bases in order to continue my struggle.

During the first Gulf war and the intense blockade of Iraq that rendered the conditions very difficult, with the consent of my husband, I sent my son Amir to Sweden to live with an honorable Iranian family who had accepted his guardianship to save his life.

Ever since we moved to Iraq, given the difficult conditions of the struggle and of living in Iraq, Mr. Yaghmaei was having problem staying and began putting pressure on me to leave the ranks of the struggle and leave Iraq for a normal life. I tried to tolerate the pressures and PMOI organization advised me to not allow my family ties to break. Even to alleviate the situation, PMOI organization returned us back to France. After a while I again requested to return to Iraq.

My ex-husband that could no longer continue the path of struggle with the complicated and difficult conditions in Iraq was sent to Europe by PMOI upon his own request. However, resolute in continuing my activities for my ideals, I was no longer prepared to return to Europe.

Finally, twenty years ago in 1993, I officially divorced him and I have had no correspondance with him ever since. He too has been living in Europe and remarried, has a new family.

A few years later, Amir gave up the idea of living in Iraq and went to U.S. forces and was moved to a camp called TIF and was subsequently transferred to Sweden.
Now, twenty years after our absolute divorce, Esmaeil Yaghmaei has attempted to publish false reports about me saying that I have either “committed suicide or died under suspicious circumstances” or that I am having problems with the PMOI, but the PMOI organization is preventing dissemination of the news. These lies are broadly published in MOIS affiliated websites.

In order to justify his claim about the possibility of my suicide, he has pointed to the suicide of my older sister and is depicting it as a new incident caused by my situation and the pressures on me and the fact that she was away from me. This is while the suicide of my sister happened 10 years ago and she was one of the victims of the misogynic regime ruling Iran.

A few days after publishing my pictures and the dubious news of my death, Esmaeil Yaghmaei published an article titled “Message to Ms. Akram Habib Khani” and while greatly insulting me in this article wrote: “I put this hypothesis in front of myself that you too have distanced yourself from PMOI positions after so many years or in other words you are giving up the struggle”. He despicably goes on to announce his readiness to “save” me!

On the pretext of this fallacious news, Esmaeil Yaghmaei has published personal pictures of me and disseminated much lies and insults against the PMOI organization. Articles by Mr. Yaghmaei are both a psychological torture for me as well as a tarnish of my image. His false allegations are also criminal and legally prosecutable.
Similarly, ten years ago, in a similar manner, his brother Abolghassem Yaghmaei, an element of MOIS and in charge of Nejat Association affiliated with MOIS in the city of Yazd, came to Ashraf to “save!” me. He wanted to encourage me to return to Iran and surrender myself to the religious fascism ruling my country, but I refused to meet with him.

Dissemination of these false reports has seriously worried my family, especially that MOIS has previously given false reports about my death to my mother and other members of my family which resulted in my mother becoming badly sick. Now you can imagine when these lies are propagated by my ex-husband by abusing my son on the websites, what effect it will have on my family and my sick and old mother.

It is not the first time that some men who gave up struggle, pushed their wives to join them. For example Ms. Leyla Ghanbari and Ms. Mahin Nazari, members of the PMOI/PMOI, during the 90s were pushed to give up the struggle by MOIS through their ex-husbands.

However, the scene that I am facing is much different; it is part of an all-out conspiracy against PMOI and particularly residents of Ashraf and Liberty by the MOIS that has escalated in recent weeks. The Iranian regime is trying to justify the suppressive measures of government of Iraq as well as Iranian regime against Ashraf and Liberty by spreading these lies. Formerly, the MOIS and its Iraqi agents in Camp Ashraf during 667 days with more than 300 loudspeakers were torturing us psychologically round the clock and invited us to surrender ourselves to mullahs. Now, this dirty psychological warfare is presenting in new form by these lies.
There is no need to say that the PMOI is an organization consisting of men and women who have gathered in this organization willingly and voluntarily to fight against the misogynic mullahs ruling Iran and to establish a democratic Iran based on Human Rights and gender equality. Nobody joined this group against his/her will or remained in the group. This is a reality that has been proved during numerous private interviews with every single of us including me in Camp Ashraf and Camp Liberty by different US intelligence agencies, ICRC and UNHCR and anyone with the least bit of decency will acknowledge that.

The PMOI leadership in different occasions urged the residents including me to leave the camp and go to U.S. forces and then to Iraqi forces by receiving financial assistance from PMOI, if he/she cannot bear the difficult situation of camps Ashraf and Liberty.

Dear Madam Pillay,
Your personal intervention is needed to condemn and defuse these kinds of conspiracy against residents of Ashraf and Liberty particularly the women in these camps. The direct and indirect Iranian regime’s plots against us in Ashraf and Liberty by individuals like Esmaeil Yaghmaei are both making the ground for suppression of the residents and their psychological torture. These two issues lie in the framework of your responsibility as the United Nations High Commissioner for Human Rights. While Martin Kobler in an extreme biased stance toward the GoI ignores violation of our human rights and provokes this psychological war against the residents by fabricated lies, your intervention is much urgent.

Let me appreciate, Madam high Commissioner, your consideration into this sensitive issue in advance.