John Bruton: I commend the UN high Commission for refugees for awarding asylum seeker status to the residents of Camp Ashraf which gives them specific international law protections 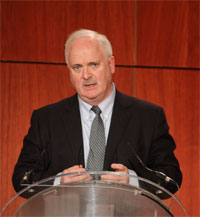 NCRI – In an international session held in Paris on Saturday, November 5th at the initiative of the CFID Committee (French Committee for Democracy and Human Rights in Iran), European and American personalities called on the European Union, United States and United Nations to take immediate measures to cancel the Iraqi government’s illegal and repressive deadline to close Camp Ashraf by the end of 2011. This call comes after the announcement of US forces’ withdrawal from Iraq by President Obama and also Iraqi forces’ preparations for an attack against the camp.

Below is speech by John Bruton:

Madam President we have very little time left to save the lives of people in camp Ashraf. This is a situation of extreme urgency. You have seen the video footage of what has been done in April of this year in what is simply a preview to what could happen in January of next year when the time limit has expired unless policy is changed. I think it is important that those of us from the Western world who have intervened in Iraq in recent times should recall that we may be haunted for generations to come by what could happen in camp Ashraf unless there is a change in policy.

I think we should remember as Europeans, how much we as Europeans have been shamed by our inability to act and the failure of European troops serving United Nations to be able to prevent in respect to the massacre that took place in Srebrenitsa. We will be ashamed of that for generations to come. Just as I know many people still alive today are haunted by the fact that they allowed people who were opposed to the Soviet Union regime then in place to be handed over in 1945 to certain death with the support of the allies at that time. It’s been a matter of continuing controversy that has haunted successive generations of Europeans that level of cooperation with Stalin took place that people were simply handed over to their certain deaths.

We are facing a similar situation now. The West intervened in Iraq. The West contributed to the situation that now exists there, the West cannot wash its hands of that. Anyone who supported that intervention when it took place must live with the consequences that are now unfolding before our eyes. This is not something that we can stand back from.

Now I commend the European Union for at last taking the action of appointing a special envoy to deal with this matter; something that has occurred only in recent months even though the situation has been clearly needing such an intervention for a much longer time. I commend also the UN high Commission for refugees for awarding asylum seeker status to the residents which gives them specific international law protections. But are we going to have a situation where as a result of inaction the UNHCR is going to be discredited because its protection may be proven to be worthless?

It is not just the residents of Ashraf and their future that is at stake but the future of respect for international law and protection of vulnerable people where ever they may be in the world that is what is at stake at this time. I think we must be willing to suspend all assistance to the government and it is a democratically elected government in Baghdad. We must be willing to withdraw all assistance from it unless and until they give a reasonable extension of the time limit to allow in a secure place and in secure circumstances each one of the camp’s residents to be individually interviewed so that in accordance to UN law they can be determined to have refugee status.

Now I think it is important that we realize and I sympathize with the view of those who say that the UN blue helmets should be introduces straight away. What we should not forget that Iraq is a sovereign country now. Other nations and United Nations can only act in Iraq in accordance with respect for Iraqi sovereignty including the United Nations.

Previous articleIran: Regime’s highest missile commander killed in explosion
Next articleSenator Nikoara: Amnesty International says that the resident of Camp Ashraf are refugees and enrages human rights violations as the Iraqi authorities plan to close down the camp