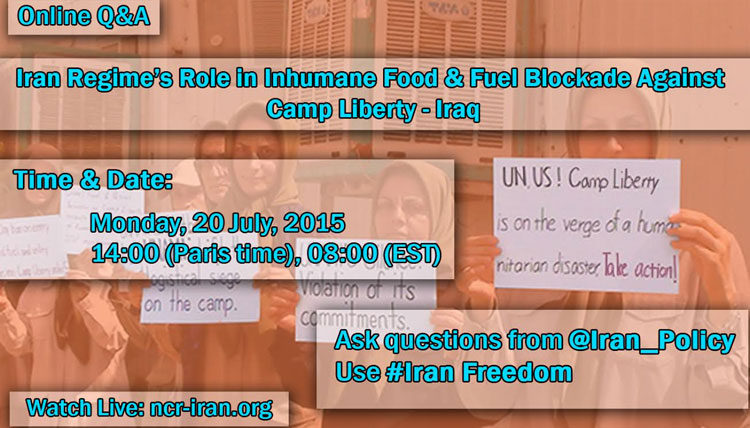 An online conference and Q&A will be held on Monday on the Iranian regime’s role on the blockade of entry of food and fuel tankers in Camp Liberty, Iraq, which houses thousands of members of the main Iranian opposition group People’s Mojahedin Organization of Iran (PMOI, or MEK).

On the orders of Iraq’s National Security Advisor Faleh Fayyad, despite the scorching 50°C heat, in an attempt to torment Camp Liberty residents, Iraqi forces at Gate 4 of Baghdad International Airport since Tuesday have prevented the entry of diesel fuel, petrol and septic tankers and food trucks into the camp.

Iraqi forces at the gate said they had received orders from the Office of National Security not to allow any vehicles, including food, fuel and septic vehicles, into Camp Liberty from now on.

Preventing the entry of fuel is causing interruptions for most of the camp’s basic services including drinking water, black-water, and catering and cooling systems which run on electricity provided by fuel-based power generators.

The conference will be broadcast live on ncr-iran.org

Send questions via Twitter to @iran_policy and use #IranFreedom