Mek-nuclear: Mr. President It Is Not To Late To Prevent Catastrophe 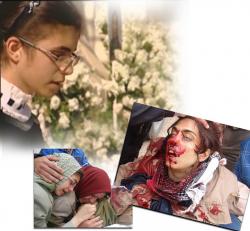 OfficialWire News Bureau – by Fabian Mahmoudi
BAGHDAD (IRAQ) – “American rulers… were expelled and thrown out of Iraq by the mighty hands of Iraqi people and Iraqi government… today… the ‘God’s front’ has reached doorsteps of the ‘evil’s front’… all Iraqi people, be it Kurds, Sunnis and Shiites are cleansing the Iraq’s territory from the enemy… today, the Islamic revolution pattern and political Islam pattern has proliferated  …today, the Islamic Republic of Iran is the focal point of the already initiated movement in the region and in the world. We say this to the US once again… Today, one person from the rest of the righteous fathers, remembrance of the martyrs and the sacred defense epics, being Haj Ghassem Soleimani, is enough to overwhelm you all.”
Saeed Jalili, Iranian Mullahs’ Secretary of the Supreme National Security Council- Friday November 4

Khamenei, the regime’s Supreme Leader, has previously acknowledged on many occasions that  the strategic depth of the religious fascism ruling Iran is in Lebanon, Palestine and other Middle East countries. Ahmadinejad has also reiterated with great pleasure that “God has granted Iran the fruits of the occupation of two neighbouring countries (Iraq and Afghanistan),” adding the clerical regime will fill the power vacuum in Iraq after US forces departure.

The Iranian opposition has repeatedly announced since the last two decades, that a python will never give birth to a dove, hence rejecting the abysmal policy of appeasement with the butchers in Tehran.

It is time, however, to act firmly and decisively towards the mullahs in Tehran. The first step is to support Camp Ashraf, home to 3400 pro-democracy  dissidents, to be annihilated by December 31 at the behest of the Mullahs in Iran as announced by Maliki . President Obama has little time to prove his vow to American values to “protect Human Rights.”

Advertise with OfficialWireThe second step is to send the right signal that would not be interpreted as a “weak sign” by Tehran and delist the pro-democratic movement MEK, which is an existential threat to the Mullahs in Iran and an anti-thesis to the regime.

This will only initiate a natural trend of “regime change” in Iran, expected years ago.

The Gale of Democratic change in the Middle East, as a matter of fact, began in Iran, only rejected by the US and EU. Had it been given the right momentum at the beginning; had the US delisted the PMOI/MEK and unleashed the magnitude of strength and dynamic potential of the pro-democratic and organised movement in Iran, the world would not have faced a “nuclear” Clerical regime.

Mullahs’ pundits are still playing on the same tune using the anti-war postulate that has long been prelude to a rise in Human Right violations in Iran. It has been helping Tehran to continue playing with ant-war sentiments. This “trick” is useless today, since the Mullahs have proven to be better than gobbles in deception and the Art of demagogy.

Hypothetically if we had successfully defused all the pro-Mullah pundits in the Whitehouse and Capitol Hill, what would be the right election move for the President of the United States?

It would be to do exactly the unexpected by Tehran. The most courageous and expected act by Iranian masses: support democratic Change in Iran.

Help Ashraf and delist the PMOI/MEK.

This might be the only chance to compensate what is already lost in the abysmal “engagement policy” promoted by Iranian lobbies.

Fabian Mamudi is Middle-East researcher and freelance anchor and writer

Previous articleIranian regime considers acquiring nuclear weapons an imperative to prevent its overthrow
Next articleMrs. Rajavi: The new IAEA report shows the clerical regime is the most significant threat to the world peace and security, and that its containment can only be achieved though a regime change