No death camps for Iranian dissidents 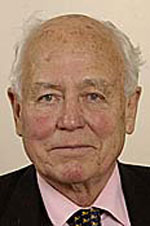 The Washington Times – By Lord David Waddington   Monday, April 30, 2012
When Elie Wiesel speaks, people listen. He speaks softly and chooses his words carefully. In 1986, when this survivor of Hitler’s death camp at Buchenwald was awarded the Nobel Peace Prize, he was cited as a “messenger to mankind” whose message has always been one of peace and human dignity.

That’s why when he spoke at the U.S. Holocaust Memorial Museum last month with President Obama present, his words were particularly pertinent. Speaking of the Holocaust and relating it to the world’s failure to stop Syrian dictator Bashar Assad and Iranian President Mahmoud Ahmadinejad, Mr. Wiesel said:

“It could have been prevented. The greatest tragedy in history could have been prevented had the civilized world spoken up, taken measures in 1939, ’40, ’41, ’42. Each time, in Berlin, Goebbels and the others always wanted to see what would be the reaction in Washington and London and Rome, and there was no reaction, so they felt they could continue.

“So we may ask: Have we learned anything from this history? If so, how is it that Assad is still in power? How is it that the No. 1 Holocaust denier Ahmadinejad is still a president? He who threatens to use nuclear weapons to destroy the Jewish state.

“Have we not learned? We must know that evil has power. It is almost too late,” Mr. Wiesel said. “Preventive measures are important. We must use those measures to prevent another catastrophe. And when other communities are threatened by anyone, we must not allow them to do what they intend doing.”

The thing to do now when it comes to Ashraf and Liberty camp residents in Iraq is simple: Remove the People’s Mujahedin of Iran (MEK) from the U.S. State Department’s list of terrorist organizations. It just takes some principle and spine.

Mr. Wiesel’s words brought back memories of a speech he made just about a year ago, at a conference in Paris on April 27, 2011, organized to denounce an Iraqi attack on Camp Ashraf, north of Baghdad, home to about 3,400 Iranian dissidents. Thirty-six innocent civilians died and hundreds more were wounded in that attack.

Mr. Weisel said he had vowed that whenever a human being is persecuted, “I shall not be silent.” But he didn’t know about Ashraf until shortly before the attack, and he asked at the conference, “Why didn’t the world know?”
A year later, the world is fully aware of Ashraf, but a tragic result still remains a distinct possibility. No longer are the men and women of Ashraf living under the protection of the United States, which promised to guarantee their security under the Fourth Geneva Convention.

Now, the Americans have left Iraq and the Iraqi government of Nouri al-Maliki has grown closer and closer to the country’s former enemy, Iran. In that role, it does whatever the puppet-masters in Tehran dictate.

High on that list is to harass and try to destroy the People’s Mujahedin of Iran, whose members have been at Ashraf for a quarter of a century. After the raid last year, which followed an earlier attack, Mr. al-Maliki ordered the closing of Ashraf by the end of 2011. Then he relented and agreed to a transfer of the dissidents to a former U.S. Army base, ironically named Camp Liberty, where they could be processed by the United Nations refugee agency before being relocated in third countries.

Half of the dissidents have been transferred, but none has been relocated. Meanwhile, they are living in increasingly inhumane conditions at Camp Liberty, close to Baghdad International Airport.

The only excuse for Mr. al-Maliki’s actions – other than his total agreement to do Tehran’s bidding – is that the MEK remains on list of terrorist organizations.

That listing must end. The State Department has been dragging its feet for almost two long years despite a U.S. federal court order that the MEK’s status be reconsidered. A court hearing is scheduled for May 8, at which dozens of former diplomats, military officials, elected officials of both parties and human rights activists have offered support as “friends of the court.”

The State Department really shouldn’t have to be dragged kicking and screaming into making a decision to delist the MEK. Indeed, the MEK never should have been listed in the first place. Officials in the Clinton administration fully acknowledge that the listing was done to accommodate the mullahs in Tehran in an effort to open a dialogue with them.

Dialogue then was a failed effort. Dialogue now with Mr. Ahmadinejad would be equally futile.

As Mr. Weisel said last year and again last month, the world cannot remain silent. Our own State Department surely cannot contribute to that silence. Justice for the People’s Mujahedin of Iran is long overdue.

David Waddington, a member of the Conservative Party, is a former United Kingdom home secretary and a former leader of the House of Lords. He is a member of the British Parliamentary Committee for Iran Freedom.