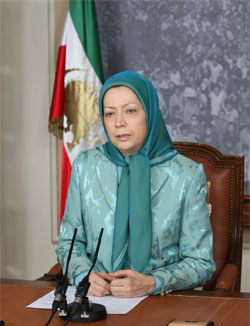 Mrs. Maryam Rajavi warns that the Iraqi government’s December 2011 deadline for closing Camp Ashraf is a serious pretext for another massacre and more than ever requires immediate action by the UN High Commission on Human Rights.

NCRI – A number of non-governmental human rights organizations, European parliamentarians, and international lawyers met on Wednesday September 21 at the UN European Headquarters in Geneva and warned about another imminent Srebrenica-like massacre at Camp Ashraf and called for an urgent measure for protection of its residents.

The speakers to the conference were: Maryam Rajavi, the President-elect of the Iranian Resistance; Dr. Alejo Vidal-Quadras, Vice President of the European Parliament; Struan Stevenson, President of the Delegation for Relations with Iraq in the European Parliament (presenter of European proposal for Ashraf crisis); Ruth N. Wedgwood , jurist; Sid Ahmed Ghozali, former prime minister of Algeria; Nontombi Tutu, human rights activist and the daughter of Archbishop Desmond Tutu; Madeleine Rees, Secretary General of Women’s International League for Peace and Freedom;  Christiane Perregaux, co-President of the Legislative Council in Geneva; Gianfranco Fattorini, Co-Chair of Movement against Racism and for Friendship among the Peoples (MRAP); Marc Falquet, Member of Geneva Parliament; and  Daniel Neeser, pastor. The conference was presided over by Michel Joli, Secretary General of Mitterrand Foundation (France Libertés).

The keynote speaker of the meeting, Mrs. Rajavi, stated that at least 490 people have been executed in Iran since January 2011. According to the Iranian state-run media, just on Sunday, September 18, twenty three people were hanged.  One person has been hanged every eight hours since the beginning of September. She added, “Nonetheless, not only has the UN been indifferent to the repressions in Iran and in Camp Ashraf, it is hosting the president of the criminal mullahs to the UN General Assembly in New York. And the UN High Commission for Human Rights failed to mention human rights violations in Iran during the recent UN human rights council meeting.”

Mrs. Rajavi continued, “First, it is necessary for the Secretary General to announce Ashraf to be a demilitarized zone and under permanent observation of the United Nations; also to order deployment of UN observers to Ashraf.  If the UN monitoring forces had not left the Camp in July 2010, the pursuing massacre on April 8 would not have happened.

“Second, the UNHCR must fully recognize the refugee rights of all Camp residents to prevent further attacks on the Camp by the Iranian regime or its collaborators in Iraq.

“Third, the US must actively engage in guaranteeing the rights implied by UNHCR statement and must specifically prevent the Iraqi government’s human rights violations against Camp Ashraf.”

“If the US cannot afford the expenses, the Iranian resistance is willing to pay the expenses of the UN monitoring team at Camp Ashraf,” emphasized Mrs. Rajavi.

Mrs. Rajavi also called for an end to the silence and inaction regarding executions and tortures in Iran and demanded that the dossier of human rights in Iran be referred to the UN Security Council.