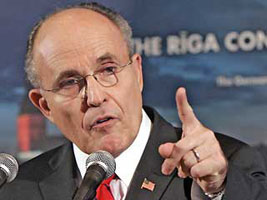 NCRI – The United Nations representative in Iraq Martin Kobler has been branded a ‘professional liar’ who is doing Iran and Iraq’s ‘dirty work’ in a scathing speech by former New York mayor Rudy Guiliani.

Mr Kobler had broken every promise he made before he forced Iranian refugees to move to the Camp Liberty ‘concentration camp’ where they are now at extreme risk of attack without any protection from Iraq, the Un or the US, Mr Guiliani said.

And he demanded that Liberty residents be immediately be given UN refugee status and moved swiftly back to the relative safety of camp Ashraf.

The former mayor, who was in office during the 9/11 terror attacks in New York, described his impressions of Camp Liberty in the wake of the deadly February 9 bombing of the camp that left seven people dead.

He said: “This isn’t a camp, this isn’t a relocation camp, and these are trailers. These are ridiculously tiny trailers that are sitting in the middle of an area that sometimes for long periods of time is over 100 degrees, that rains incessantly.

“Well not only did I turn out to be right that it was a concentration camp, but it’s now become a killing field.

The camp’s residents had all been moved from Ashraf, and were the same people who had handed over their arms to the US when they invaded Iraq in 2003 and effectively ‘surrendered their ability to defend themselves’, Mr Guilani said.

He added: “The US government gave them a promise when they surrendered their own weapons that they would act as protection for these people.

“To me that’s a solemn promise on my country.  That’s a solemn promise that we have now broken time and time again. The US should be ashamed of itself for having broken that promise because the US was instrumental in requiring these people to leave Camp Ashraf, put on tremendous pressure to go to concentration camp living, put on tremendous pressure for 2 years to move.

Martin Kobler then assured the Camp Ashraf residents that they would be safer at Liberty because it was near Baghdad and its airport, but it turned out to be a tiny, squalid area enclosed by an Iraqi military base, Mr Guiliani said.

He continued: “Martin Kobler made the point that this is a very secure place to be. You’re in a military base surrounded by the Iraqi military.

“I believe every single thing he said to us in June was a lie.  Because he has proven himself to be a professional liar, which is unfortunate.  I believe there is no choice with Martin Kobler, if the UN wants to do the right thing he should be removed immediately.  He is doing the dirty work of the Iraqi and Iranian governments.  He is not doing the work of the UN. He is not doing the work of trying to protect people who are in a vulnerable status.

Mr Guiliani said Camp Liberty was now so unsafe – and that the Iraqis must have allowed it to be attacked – that the residents should be moved to the United States for their own protecion.

He went on: “Why is this so important? It’s so important because when the US gives its word, it should mean something.  If the US wants to be honored and respected in the world, we can’t give our word to someone be it one, three thousand or millions, and not take seriously the fact that we must keep our word.

“And second it would be really really important to change our dynamics with Iran.  We all know Iran is on its way if it isn’t already a nuclear power. At best it’s months away.”

Sanctions were having an effect on the economy, but no impact on the government, on the ayatollah, or the power structure, he said.

Negotiations has also failed and and as long as Russia and China remained exempt from the sanctions, Iran would survive and could buy time to develop their nuclear weapons, he told delegates.

And the most important way of avoiding full scale war with Iran was to support the legitimate opposition to the regime, which he described as ‘one of the worst in the world’.

“The Ayatollahs and Ahmadinejad are far worse certainly than Mubarak.  Mubarak was pretty bad, but not nearly as bad as the regime in Tehran. Kaddafi was pretty bad, but he had given up his weapons of mass destruction, he had been kind of neutered, bad to his own people. Assad is terrible, but none of them compare to what Iran has done under this regime for the last 30 years.

“This is a horrible regime, we should be supporting the people who have a chance to overthrow this regime, and not doing what we did several years ago, turning our back on them and leaving them in the street unsupported.

“Here we have a group that has been on record for over a decade for supporting all of the things that are most important to us.

“So I say if you want to gain leverage in your negotiations with Iran, if they ever take place, the best thing to do is to support the MEK as an alternative to the regime in Tehran.”