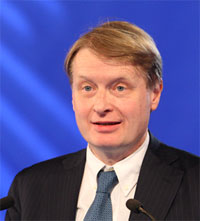 Senator Lucio Malan: March 24, 2012 Paris – Thank you.  Thank you.  Thank you.  Thank you, thank you very much. We are here not only today because today is, this day is the new year, the new Iranian year, but because we want also to remember what happened last 8 April in Ashraf when many people were attacked and massacred.  People unarmed were massacred by policemen and soldiers with machineguns, with weapons.  And let’s remember their sacrifice.  It will be a shameful spot in the history of Maliki’s rule, as well as a great lesson of sacrifice, dedication and determination by those Ashraf residents who were killed for all human beings who are struggling for freedom all around the world.

As an Italian senator I’m proud to say that in Italy we have a long list of advocates for the National Council of Resistance in Iran, both in the House of Deputies and in the Senate.  A majority of members of both houses have declared their support for protection and rights of Ashraf residents on many occasions.  Italy has given shelter to a few Ashraf residents who were wounded in the attack of last April.  And we are also ready to receive a number of refugees from Camp Liberty, Camp Ashraf.  Of course Iranian regime has tried to discredit the resistance movement, and those who support it, in order to destroy the support that NCRI has in Italy.  But they didn’t succeed.  Because no matter how smartly their lies are fabricated we are able to tell the truth from lies, especially when these lies come from professional liars.  [applause]

All that was quite expected.  What was unexpected was to see Western government officials to somehow join Tehran rulers in their evil campaign.  This is unfortunately happening in the U.S. right now at the cost of discrediting some of the most trusted and trustworthy former officials of that nation who are brave men known for speaking out the truth and opposing injustice.  They are following the path of the great heroes of American history. [applause] I deeply admire them.  And I want to tell them on behalf of my Italian colleagues that we join our hands with yours and we join our voices to yours for the protection of the Camp Ashraf and Camp Liberty residents.  [applause]

I especially subscribe to what one of them, Rudy Giuliani, whose ancestors came from my country, and he wrote in his book on leadership, he wrote, “You have to stand up to bullies because if you don’t bullies will be encouraged  and they will take advantage of you.”  And this is wise policy not only about individuals, but also among nations.  There are many world leaders who know how immense a threat would be to the world a nuclear Iran.  But there are few who realize or recognize how instrumental has been the role of MEK and Iranian resistance wider coalition of the National Council of Resistance of Iran in getting information about Iran’s nuclear capabilities.  Not only they have not been praised for what they have done, but instead they have been subject to many obstructions.  The time has come for international community to correct its mistakes by recognizing the NCRI as a democratic alternative to the clerical regime and by actively defending the lives and rights of the residents of Ashraf and Liberty against the aggressions of the Iranian regime and its Iraqi lackey.  [applause]

Now we are very worried for what is going on.  Bardia Mostofi  lost his life due to the harsh conditions of the transfer from Camp Ashraf to Camp Liberty.  Iraqi government didn’t accept to delay the relocation in order to ensure that it could be smoothly enacted.  And what is worse is that UNAMI sided with the Iraqi government to exactly fulfill its desires at the cost of imposing inhumane pressures on the camp residents.  Now there are 1,200 residents in Camp Liberty, which by no means can house them, let alone the 3,400 of Camp Ashraf.  They must be praised for their goodwill.  And Mrs. Maryam Rajavi must be praised, for by accepting this move she has shown once more the vision of the leader, the wisdom [applause] of the statesperson and the courage of the mother.  And despite all difficulties, we know that extraordinary people in Camp Liberty can fix things in the camp, provided the Iraqi government lifts all unreasonable restrictions on them.

Let me mention three items.  First, there is no justification for the presence of armed police in the camp, and we want them to be moved outside.  Second item is that we want the Iraqi government to lift the restrictions for constructions to be carried out inside the camp.  Why can’t the residents build the facilities they need inside the camp?  How could building a pathway for the sick ones harm Iraqi sovereignty.  This is a ridiculous restriction and it is a shame when the United Nation people accept it.  Third item is to increase the camp area as the number of residents increase.  Liberty residents are not allowed to leave the camp and thus cannot use the public facilities.  Therefore all facilities and services they need should be available to them inside the camp.  The current area does not allow this at all.  I see no reason why the Iraqi government should reject these very reasonable requests, unless their only goal is to harass those people.  And they find it hard to face the reality that not only the Liberty residents are persistent in their dignity, but they haven’t lost their spirits and they want to keep being masters of their destiny.

We urge, therefore, the international community, the United Nations, the United States government, the European Union, all countries of the free world to ensure these demands, to protect the lives and the rights of the people in Ashraf and Liberty.  By doing this they will show to the world that the principles of human rights, the protection of refugees, and the humanitarian values at large, are not just beautiful but idle words written in the UN Charter, in the Declaration of Independence and in the Constitution of the United States of America, in the Charter of Fundamental Rights of the European Union, but they are alive and strong in the hearts of the leaders and of the people of the free nations and still guide their decisions.  Doing the contrary in order to appease the tyrants will only make the tyrant stronger and our spirits and our nations weaker.  We pray that this will never happen.  It happened in the past and it was a tragedy for all mankind.  And may the new day that is the Nowrooz of freedom for Iran come soon, and may God bless us all. [applause]

Previous articlePersian New Year: Time for a new approach towards Iranian dissidents
Next articleColonel Wesley Martin – MEK not a threat but a Strong Ally