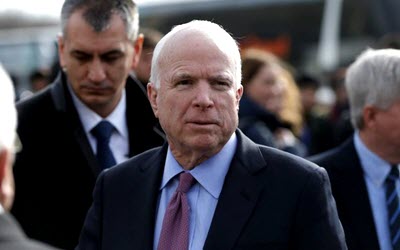 “In 2003, the United States made a commitment to protect thousands of members of the Iranian dissident organization, the Mujadedin-e Khalq (MEK), who agreed to surrender their weapons and came under our protection as a result. Today marks the culmination of that commitment with the safe and successful relocation of all Iranian dissidents residing in Camp Liberty, Iraq to Albania. This is a welcome and long overdue development.

“I extend my deepest thanks to the Government of Albania for its hospitality and courage in its efforts to resolve this humanitarian crisis. Albania’s willingness to provide refuge to the residents of Camp Liberty is a true testament to the spirit and values of the Albanian people.

“Given the history of the Iranian regime’s brutal crackdown on these residents and the subsequent violence directed against them during their stay in Iraq, I believe it is imperative that the residents continue to be recognized as people of concern and entitled to international protections underscored in the 1951 Geneva Convention. This is necessary to ensure that the residents will finally have the opportunity to enjoy their long-denied rights and privileges in a new and democratic environment.

“I continue to stand with the people of Iran and the Iranian-American community who yearn for a free Iran. The safe resettlement of these Iranian dissidents is a vital step in countering the Iranian regime’s malign influence in the region, and it serves as an important reminder to our allies and adversaries that the United States stands by its commitments.”

Previous articleDeparture of the final group of Camp Liberty residents from Iraq
Next articleROYCE, ENGEL STATEMENT ON COMPLETION OF CAMP LIBERTY RESETTLEMENT