The PMOI/MEK is a natural ally of those seeking civic freedom, human rights and democracy in Iran 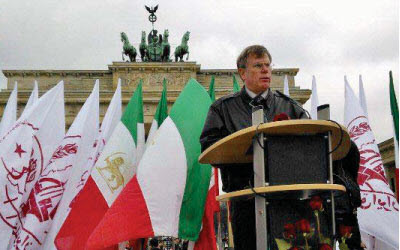 As understanding of the Iranian resistance grows, support should follow

NCRI – Wesley Martin, a retired U.S. Army colonel, served as the senior anti-terrorism officer in Iraq from 2003 to 2004 and the senior operations officer for detention operations in from 2005 to 2006. He wrote an article for the United Press International on Friday, September 9, subsequent to the successful completion of the resettlement of Camp Liberty residents from Iraq to Europe. He mentioned that simultaneous with growing calls seeking justice for 30,000 massacred political prisoners in Iran, the victorious transfer of PMOI members opens a new chapter for the Iranian people and Resistance. The following is the full text of his article:

This summer marked the 28th anniversary of an extraordinary massacre of political prisoners in the Islamic Republic of Iran. In the span of a few months in 1988, upwards of 30,000 people were put to death as a result of minutes-long trials that were little more than loyalty tests for the regime. The vast majority of those victims were members and supporters of the People’s Mojahedin Organization of Iran (PMOI/MEK), and recently revealed information has helped to confirm that the massacre was primarily motivated by a longstanding desire to snuff out the opposition of the MEK to the increasingly repressive theocracy.

Predictably, then, the 1988 massacre was an early incident in what would become a long history of hardship for the MEK. That hardship would follow the resistance group beyond the borders of Iran, and would be made worse over the years not only by the direct action of Iran and its proxies, but also by the inaction of much of the world community.

At the end of the U.S. occupation of Iraq, thousands of members of the MEK were relocated out of the community they had built there during the ’80s. After two massacres of the residents by the Iranian regime’s proxies in the Iraqi government, under an agreement among the Iraqi government, the United States, the United Nations, the Iranian exiles began to be settled in the former U.S. military base of Camp Liberty near the Baghdad airport. But before the relocation could even be completed, Camp Ashraf was brutally attacked by Iraqi affiliates of the Iranian regime, resulting in over 50 deaths. No one has ever been held accountable for the crime.

On Friday, the final group of dissidents left Iraq through a scheme organized by the UN High Commissioner for Refugee assisted by the U.S. Embassy. The Iranian regime resorted to all means to prevent the relocation but it was lost a battle for the mullahs and their Quds Force, which intended to eliminate the movement by in particular arresting and extraditing its leadership in Iraq. The MEK and its members’ steadfastness resulted in massive international support from U.S. dignitaries, to members of Congress and European parliamentarians.

Camp Liberty was only intended to be a brief stopping point on the way to the MEK members’ relocation to foreign countries where they would not be under constant threat from Tehran. But years passed with barely a word being said about the 2011 agreement. The MEK has always had staunch supporters in the U.S. Congress and other Western legislatures, and those individuals made repeated inquiries into the situation, but for far too long the response was tepid at best. And in the meantime, the MEK community has suffered five missile attacks, a blockade of medical supplies, and denial of basic services, resulting in dozens more deaths.

The MEK is by all accounts a natural ally of those seeking civic freedom, human rights and democracy in Iran. The 10-point plan of Maryam Rajavi, the president of its political coalition, the National Council of Resistance of Iran, has been described as embodying the essential principles of any democratic nation in the modern world. It outlines a future for Iran that will be based on secularism, free and democratic elections, the active promotion of the rights of women, and avoidance of the current regime’s policies of aggressive intervention.

As time goes by, there are more and more reasons to be confident that an altogether new era for the PMOI has emerged. It is an era that promises to expose the crimes that the Iranian regime has perpetrated and continues to perpetrate against pro-democracy organizations and the Iranian people as a whole. And it is an era that may finally give rise to recognition of the Iranian resistance as the force for bringing freedom and democracy to Iran and subsequently contributing to end extremism and stabilizing the region.

The resettlement comes at a time of a newfound atmosphere of awareness regarding the nature of the Iranian regime, its past crimes, and the just motives of the resistance against that regime.

In recent weeks, political discourse inside the Islamic Republic has changed dramatically, following the release of an audio recording made in 1988, at the time of the massacre of political prisoners. In it, then-heir to the supreme leadershipAyatollah Hossein-Ali Montazeri upbraided the leading participants in what he described as “the worst crime” in the early history of the clerical regime. Montazeri’s account of the massacre has provided for unprecedented recognition of its true severity, and it has spurred Tehran’s victims and their families to come forward with their own accounts.

Slowly but steadily, the discourse surrounding the massacre of the PMOI is making its way beyond the borders of the Islamic Republic and into the West. There, it is finding a growing population of advocates for support of the Iranian resistance and a long-term policy of regime change. As more information leaks into the West, it will be increasingly difficult to deny that the past and present crimes of the Iranian regime solidify that regime’s status as an enemy of the world community and modern times. Conversely, both the principles and the historical suffering of the MEK make it clear that the Iranian resistance deserves a much closer alliance, and much greater effort, than we have given it so far.