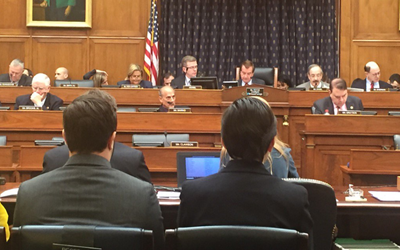 NCRI – The United States House of Representatives Foreign Affairs Committee on Wednesday unanimously approved and referred to the House Floor a bipartisan resolution calling for “safety and security” of the members of the main Iranian opposition group People’s Mojahedin Organization of Iran (PMOI or MEK) living in Camp Liberty, Iraq. It was the first resolution of its kind.

The Resolution, ‘H. Res. 650’, introduced by Rep. Ted Poe (R-TX), calls on the U.S. government to work with the Government of Iraq (GoI) to make sure personnel responsible for providing security for Camp Liberty are vetted and are not affiliated with the Iranian regime’s Islamic Revolutionary Guards Corps (IRGC) Qods Force or its surrogates. The draft resolution also calls on the U.S. and GoI, in coordination with the United Nations High Commissioner for Refugees (UNHCR), to help the PMOI (MEK) members sell their property and assets at Camp Ashraf and Camp Liberty, which in turn can facilitate their resettlement. It urges the above noted stakeholders to expedite the residents’ resettlement “according to the terms of the December 2011 MOU.”

In remarks prior to passage of H. Res. 650, Committee Chairman Ed Royce (R-CA) said: “This past October, 23 residents of Camp Liberty were killed in a rocket attack on the camp. And we have been receiving information that the Iranian regime and their proxies in Iran are preparing for an imminent attack against the camp’s residents. That is why Mr. Poe’s resolution calls on the Administration and the Iraqi Government to work to provide camp residents with the protections they need, and to ensure they are expeditiously resettled outside of Iraq, in such safe-havens as Albania.”

Following the hearing, Chairman Royce added: “My goal is to get this quickly to the Floor of House of Representatives.”

The Committee’s Ranking Member, Eliot Engel (D-NY), noted: “The residents of Camp Liberty deserve to live in dignity and without fear of violence.”

He described the October 29, 2015 rocket attacks on the PMOI (MEK) members in Camp Liberty by the Iranian regime’s affiliated militia as “the height of cowardice.”

Securing the safe resettlement of the PMOI (MEK) members housed at Baghdad’s Camp Liberty would allow the U.S. to “reclaim some of our honor as a country,” Rep. Dana Rohrabacher (R-CA) said Wednesday during the markup hearing. “It has been a black mark on our country on several – on many occasions, when we did not stick with the people who stuck with us.”

Rep. Rohrabacher said although the Camp Liberty residents have long opposed the “mullah dictatorship in Tehran,” the U.S. has “let down the people who have put their lives on the line for us, and we’re just letting them drift.”

Rep. Brad Sherman (D-CA) pointed out that the U.S. has leverage with the Iraqi government, which relies on U.S. support.

“It should be called upon very strongly by the United States to meet its minimum human rights obligations to protect Camp Liberty.”

Rep. Sherman said whatever one’s view of the Iran nuclear deal, “the MEK has played a critical role in revealing information about Iran’s illegal nuclear program.”

“We all owe a debt of gratitude to the MEK for bringing this information to the world, and causing the United States and the world to focus on the problem.”

Rep. Ileana Ros-Lehtinen (R-Fla) said it was no secret that Iraq has failed to protect the residents.

“Camp Liberty has never been given adequate protection, and now with the Iran nuclear deal and Iran getting more money to carry out its illicit activities, I fear that Liberty will be an even easier and larger target for the regime than before,” she said.

The resolution’s author Rep. Ted Poe (R-TX) said 140 PMOI members have been killed and 1,300 others injured in seven attacks on their two camps in Iraq. Seven have been kidnapped.

The resolution’s official name is: “H.Res.650 – Providing for the safety and security of the Iranian dissidents living in Camp Liberty/Hurriya in Iraq and awaiting resettlement by the United Nations High Commissioner for Refugees, and permitting use of their own assets to assist in their resettlement.”

The full text of the resolution can be found HERE.

Further details about the resolution are available HERE.