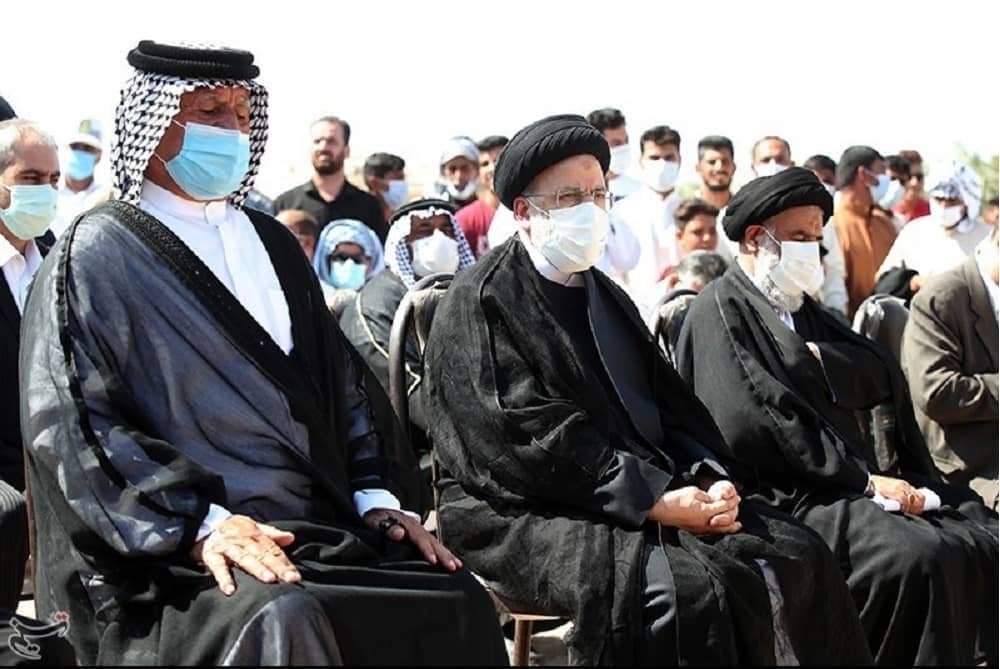 On Friday, August 27, just two days after Ebrahim Raisi got his cabinet confirmed by the parliament, he mounted a modest plane, drove a domestically produced car, and visited Ahvaz, the heart of the unrest-driven Khuzestan province. In any other country of the world, such acts would have been interpreted as the best kind of political PR stunt but in Iran, people just don’t buy the slightest bit of it.

While campaigning against six other presidential contenders in June, Ebrahim Raisi was exploiting the word “people” more than any other candidate in the Iranian regime’s history. The level of his insistence about ‘reaching out to people’, ‘working with people’ and ‘talking to people’ revealed how much the regime is concerned about a popular revolt that has inflamed several times into nationwide uprisings since 2017.

Iranians, as well as political observers, still remember how Hashemi Rafsanjani, the former president after Khomeini’s death, called himself ‘the Builder-in-Chief’, trying to pose as the man-to-go for building up a nation that had lost several hundred thousand lives and more than 1 trillion in treasure to war with Iraq.

Replacing Rafsanjani, Mohammad Khatami sold himself as “a reformist”, trying to dampen the nationwide outcry for social and political freedom. Mahmoud Ahmadinejad who succeeded Khatami posed as a populist, wore regular clothes, spoke slang language, and tried to pretend to be a man of the people. Also, Hassan Rouhani did try to run the ‘moderate show’ to hit a nerve in the infuriated society. Nevertheless, fraud, corruption, plundering, and all-time-high bloody oppression of the regime have left no room for deceit and Ebrahim Raisi is wearing a worn-out mantle that no one respects anymore.

By choosing the Khuzestan province, Raisi showed where the regime fears most that an uprising could be imminent. In July, while he was conducting speeches and preparing himself for the presidency, people in a dozen of Khuzestan cities that were fed up and tired of power outages, water shortages, and inequality rose up and chanted “Death to Khamenei”. Clashes with security forces left 12 people dead, hundreds injured, and more arrested and held in the regime’s prisons.

But other than the state-owned media, no one was impressed by Ebrahim Raisi’s rushed visit to the oil-rich province. Jomhouri-e Eslami, a newspaper close to Rafsanjani’s elite wrote: “Ceremonial moves such as… posing for a photo with employees of the morgue of the Behesht-e-Zahra Organization (an institution charged with handling the burial procedure), and ministers’ going to their ministries in the middle of night … were just a show and they would work only if they swell the family purse, bring down prices and push down COVID-19 deaths to near zero… Otherwise, [Raisi’s] administration would be similar to the previous ones, especially [from Ahmadinejad’s era], which had focused on staging shows.”

Reacting to Ebrahim Raisi’s visit to Khuzestan, a local member in the parliament called the trip “a show” and said that “these short, one-day trips will not solve Khuzestan’s problems” and called on the government to stop the practice. State-run Aftabnews website quoted MP Majid Naserinejad as saying: “Problems such as sewage issues, unemployment, drought, the destruction of palm trees, etc. are problems which need constant attention and major decisions.”

At the same time, word went out that Mohammadreza Naqdi, Deputy Commander-in-Chief of the IRGC has been appointed to the special governor of Khuzestan by Ebrahim Raisi. Although not officially confirmed, reactions on social media indicated concerns about increasing pressure on the people of the province and the suppression of popular protests following the appointment. Perhaps that was the only thing that Iranians wouldn’t take as a showoff in Khuzestan.

While Raisi was traveling to several places, like his predecessor always have done, he vowed to solve a large part of the unemployment problem in Khuzestan by expanding industries and agriculture. During this trip, Ebrahim Raisi did not discuss the conditions of the detainees, those who protested water shortages and were brutally harassed and taken into custody. If Raisi would reach out to any other audience other than the handpicked ones he had spoken to, he would have faced hundreds of families who are desperately looking for the whereabouts of their children and loved ones.

At the end of the day, Raisi left Khuzestan for Tehran to talk to the media and pose for the cameras. He left behind a province, waged by poverty, drought, unemployment, and rage. He didn’t explain why these problems exist and what he’d done through four decades of his tenure in the highest office of the country’s judicial system. Nor did he explain what his true plans are for the province. But if history is any guide, the future will prove that all his staging has been in vain.