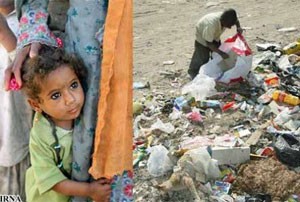 Some 12 million Iranians are living in poverty according to a senior official of the Iranian regime. This is their first public admission to extensive hunger in the oil rich country.

The Minister of Labor and Social Affairs said poverty is assessed based on the three indices of revenue, appropriate health and education services, reported the state-run Mehr news agency on December 5.

The official news agency IRNA quoted Deputy Health Minister Ali-Akbar Sayari on December 4 claiming that 78% of Iranians have a poor diet with includes a lack of fruit and vegetables.

Yet the government of Hassan Rouhani has decided to increase the price of bread (the main source of nourishment for poor Iranians) by 30% – 40%.

According to one study of the population, the provinces most affected by endemic poverty are Baloutchistan, Hormozgan, Lorestan, Kermanshah and Khorasan.

Oil revenues, constituting a significant part of the budget, have fallen sharply since last year. But the mullahs continue to squander the country’s resources to finance the war on the side of the Syrian dictator and to support his terrorist allies in Iraq, Lebanon and Yemen.

An official publication by the Iranian Ministry of Economy and Finance revealed in its July issue that between the years 2005 and 2013 the standard of living of Iranian families has dropped significantly. The purchasing power of essential items fell by 60%, while the housing purchasing power fell by 25% and the rent has fallen by 43%.

Previous articleJoe Biden: There is a “less than even shot” of a nuclear deal with Iran
Next articleIran: Minister of Intelligence admits murder of opposition members in exile