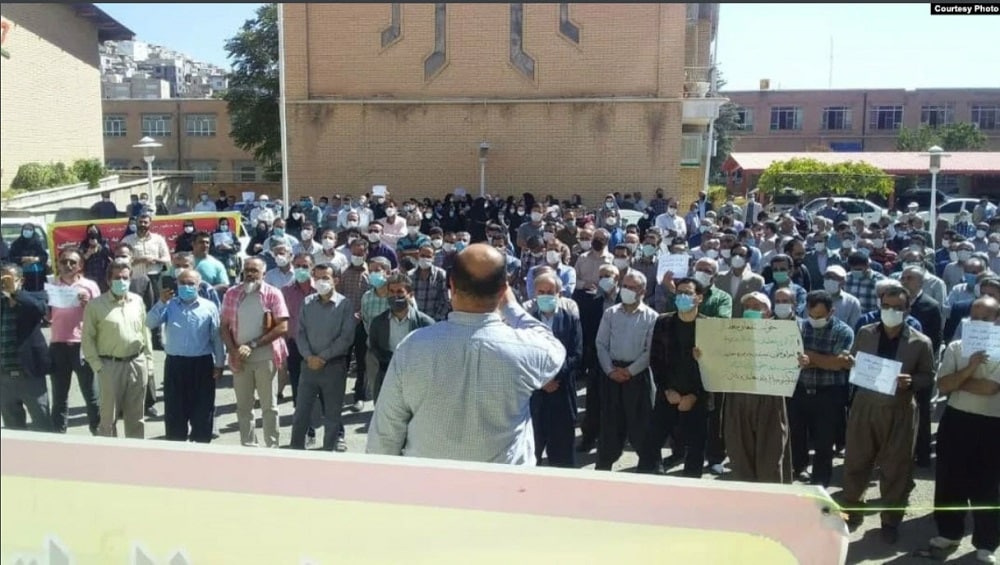 On Sunday, teachers, retirees, and workers held demonstrations across Iran, protesting their poor living conditions and the regime’s corruption and plundering. Since Ebrahim Raisi was appointed as the regime’s president, these protests have continued and expanded.
Iranians suffer from rising inflation rates and skyrocketing prices. They hardly even make their ends meet. As time passes, it becomes evident that Raisi and his government would not resolve Iran’s economic issues.

“When the government puts its hands in people’s pockets through banknote printing etc., instead of reforming the economic structures, naturally people face rising inflation rate instead of economic growth and opportunities. In this situation, resolving the inflation problem certainly takes time,” wrote the state-run Keyhan daily on Sunday, known as the mouthpiece of the regime’s Supreme Leader, Ali Khamenei.
In other words, despite hollow promises by Raisi, who is Khamenei’s appointee, the Iranian people’s lives would not improve.

On Sunday, protesting teachers, workers, and pensioners, chanted: “Retirees die, but they will not accept humiliation,” “Our plates are empty, enough of empty promises,” “Inflation, high prices, are like a plague on people’s lives,” “We do not want empty promises,” and “livelihood is our inalienable right.”

On Sunday, as many Iranian cities witnessed these protests, Khamenei gave and speech, referring to the “enemy inside the country,” and underlined that his regime’s “security is the most important issue,” which “should be paid attention to.” He then emphasized that his repressive forces such as the “Revolutionary Guards (IRGC), State Security Forces, Police and Basij [paramilitary] are the [regime’s] protecting shield against the enemy’s threats.”
The aforementioned security forces’ primary task is to oppress any dissent.

People on Sunday chanted: “Be afraid (calling on the officials), we are all united,” and “Only by [pouring on streets] we could obtain our rights.” So, it is clear who is the regime’s enemy: the Iranian people.
These ongoing protests have become Khamenei’s nightmare. He clearly knows what a devastating result these protests could have for him and his regime. Thus, he warns his regime officials of the “enemy inside the country.”

Khamenei and Raisi are afraid of these ongoing protests because they are in a deadlock. They should address people’s problems and answer their demands by reducing their plundering of Iran’s national wealth and corruption and allow people to protest, or they should prepare themselves to confront the “enemy.”
“If the cost of living and the problems we have seen in recent times continue, in the coming months, we will face popular protests due to the living and economic problems,” wrote the state-run ILNA News Agency on Monday.

“For years, the mullahs have wasted the assets and properties of the greater majority of the Iranian people on suppression, wars, terrorism, and missile and nuclear programs. They have brought nothing to the people but oppression, discrimination, poverty, unemployment, and inflation.” Mrs. Maryam Rajavi, the President-elect of the National Council of Resistance (NCRI) tweeted adding, “Hail to the freedom-loving teachers and retirees in Iran who took to the streets to demand their rights despite high risks and security forces’ threats. Resistance, uprising, and the overthrow of religious fascism is the only way to realize the rights of retirees, teachers, and workers.”

For years, the mullahs have wasted the assets & properties of the greater majority of the Iranian people on suppression, wars, terrorism, and missile & nuclear programs. They have brought nothing to the people but oppression, discrimination, poverty, unemployment, and inflation.

Khamenei and his regime would not stop plundering people’s wealth. The Head of the regime’s Economic Security Police acknowledged a 300 percent increase in embezzlement compared to last year.
Increasing oppression or more plundering would not save this regime. These measures could only delay another nationwide uprising for a short time. This time, the regime would not survive from people’s uprising because they have nothing to lose and are truly the regime’s “enemy” and its existential threat.