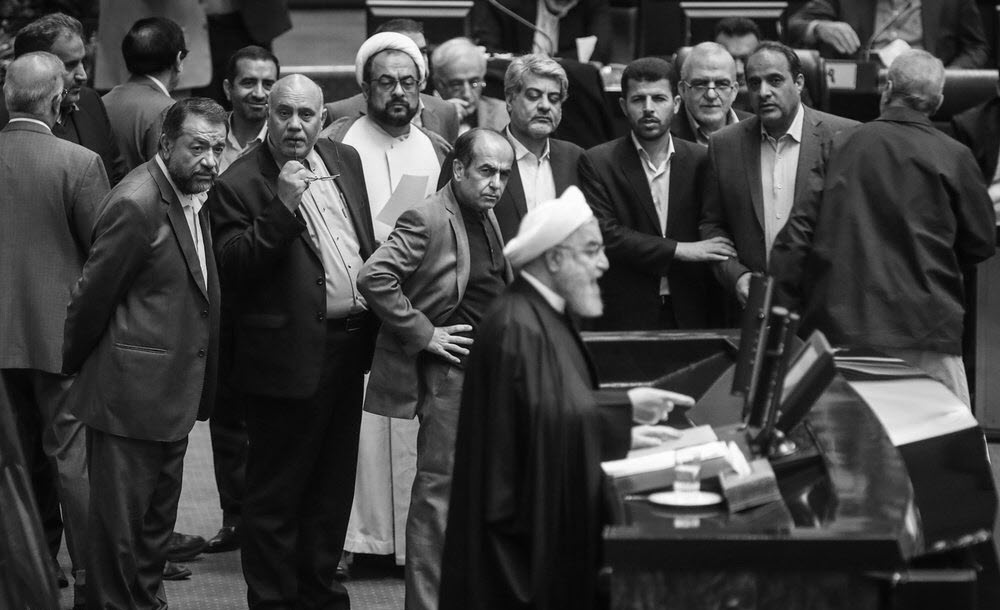 As US sanctions continue to bite, the Iranian regime’s proposed state budget for the coming year points to a 3.7 per cent decline in revenues in rial terms which as usual has been diminuend.

The budget bill — proposed by regime’s president Rouhani on Tuesday, but yet to be approved by regime’s parliament — estimates 2,086tn rials in revenues for the next Iranian fiscal year — down from the 2,161tn rials forecast for mid-March when the financial year ends.

“This budget is drafted based on the impact of sanctions while the economy will definitely shrink next year,” said one economic analyst. “The government has not only taken the current sanctions into consideration but is preparing for tougher sanctions to come.”

In the budget bill, the regime forecasts tax earnings of 1,535tn and oil, gas and electricity sales of 1,426tn rials, but economic unproductivity is expected to hit tax revenues while the decline in global oil prices is likely add to the pressure.

Iran’s economy has wriggled since US president Donald Trump pulled out of the 2015 nuclear accord in May and re-imposed sanctions, including restrictions on oil sales — the country’s lifeline.

The rial, the national currency, has depreciated by more than 50 per cent this year while year-on-year food prices have increased by about 60 per cent, according to the Central Bank of Iran.

The total budget amounts to 4,786tn rials ($113.9bn according to the official parity rate against the US dollar and $43.5bn based on the open market rate) for the next Iranian year. This includes income from sectors which are doubted to be fulfilled such as privatization of some state-run companies. A deficit of 1,120tn rials is forecast but analysts believe the figure could rise much higher.

The Iranian regime insists on its foreign and defense policies of exporting terrorism and extremism and meddling in the internal affairs of the neighboring countries despite rising dissatisfaction over high living costs and bankrupt economy.

The price of basic foodstuffs has almost doubled in recent weeks, fueling public anger that the regime has little control over prices and leading to protests by factory workers, labourers and the retire, and almost all walks of the Iranian society, the overall trend points to a grim outlook for the ailing religious dictatorship in a near future.