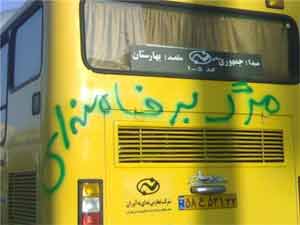 The website, affiliated with the former regime Majlis Speaker, Mehdi Karoubi, also says that a large number of the company’s employees are under extreme pressure to sign new contracts with low pays without consideration of their experience – some going as far as 20 years.

Moreover, the south terminal has been transferred to IRGC-affiliated companies. Many of the buses have also been sold to these companies.

In addition to two of the syndicate leaders of the bus company, Mr. Mansour Osanlou and Ebrahim Madadi, who have been incarcerated for several years in unbearable conditions at the Evin and Gohardasht prisons, Saeed Torabian and Reza Shahabi, two other activists, have also been arrested by intelligence agents and imprisoned.