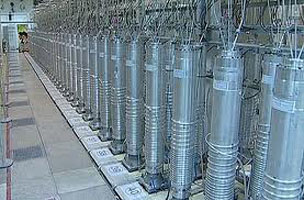 Following the first Persian Gulf War (Kuwait), international concerns regarding the Iranian regime’s enrichment activities and efforts to develop nuclear weapons heightened, which in turn led to limited inspections of regime’s sites by the International Atomic Energy Agency (IAEA) on two occasions: February 1992 and December 1993.  This prompted the regime to decide on full secrecy in the nuclear arena.

Taking into account the unsuccessful attempt to purchase nuclear warheads frrom Kazakhstan in 1992, the regime concluded that the only way to access nuclear weapons was to obtain nuclear technology through smuggling and by hiring nuclear experts frrom the former Soviet bloc.

In this period, the mullahs’ regime followed, on one hand, large and clandestine plans for heavy water at the Arak site for producing plutonium, and the Natanz project for enriching uranium, in order for the AEOI to obtain the full nuclear fuel cycle.

On the other hand, it concentrated nuclear engineering projects for building nuclear weapons at the Ministry of Defense, which is completely controlled by the IRGC, so that with complete secrecy, it could keep the program out of view of any inspections by the IAEA within the NPT framework.

As the two wings of nuclear activities for obtaining nuclear weapons, the Ministry of Defense and AEOI have advanced the regime’s nuclear efforts in parallel.

It is worth recalling that in order to enforce the IRGC’s hegemony over the regular forces,  after the war with Iraq in 1989, Khamenei agreed to the merger of the Ministry of IRGC with the Defense Ministry upon the recommendation of the then President Ali-AKbar Rafsanjani, and formed a single ministry called the Ministry of Defense and Armed Forces Logistics.  Most members of the new Ministry of Defense were frrom the IRGC and since its formation, the minister of defense, and most of the deputy ministerial positions, have always been selected frrom the IRGC in order that the ministry remains under its control.

Ministry of Defense and Nuclear Engineering

In 1993, the regime transferred all nuclear research centers of the IRGC and other military and academic centers to the Ministry of Defense.  After this transfer, the IRGC’s research center that was working in the field of nuclear engineering was renamed the center for “Defense Ministry’s Defense Research Training”.  This center carried out its nuclear military projects at the Lavizan Shian site.

At the AEOI, obtaining enriched uranium and plutonium was placed high on the agenda, and research and testing by the organization started for producing enriched atomic fuel.

In order to produce enriched uranium, the Natanz site was constructed by the regime.

For producing plutonium, the regime has been considering building a 40 megawatt reactor since 1993.  After plans for purchasing this reactor frrom Russia failed, the regime began building the Arak site in the Khondab region of the city of Arak. 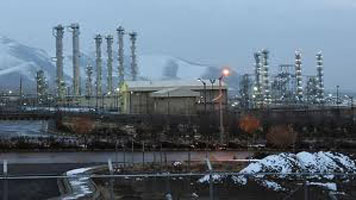 Major Enrichment Plan in Natanz and Heavy Water in Arak

After the Iran-Iraq war, the regime began seeking plutonium in order to build a bomb. It first tried to obtain it through China, Argentina and Russia. The planing of the project for establishing a 40-megawatt heavy water reactor was started in 1996 when it was first designed. and the AEOI started the construction in 1999  in the Khondab region of Arak as a top secret project.

This complex is comprised of two sections; the first section is to produce heavy water and the second section is the 40-megawatt reactor.

Arak’s heavy water plant is made up of four main processing units and 9 lateral services units. This project is built in a 20 hectare area and has about 17,000 square meters under development.  Eleven internal consulting companies and 41 Iranian construction and installation companies were also involved in that project.

This project was copied frrom similar American plants, and its final design was done through consultation and approval by several Russian scientists.

To avoid leaks, the AEOI conducted the project under the cover of a company named “Mesbah Energy Company” which is a subsidiary of the AEOI.

This site is located in a separate section but at the same complex where the heavy water factory is.  The Rahkar Sanaye Company, which is one of the AEOI’s companies, was responsible for installing the IRS40 heavy water reactor.  The AEOI’s Energy Novin Company carried out part of this project and putting the reactors into operation.

According to reports received frrom designers and builders of this project, this reactor will produce 8 to 10 kilograms of plutonium annually which is sufficient for two nuclear bombs.

Arak’s heavy water site and the IRS40 heavy water reactor were exposed by the Iranian Resistance in August 2002. The site was subsequently inspected by the IAEA which proved the veracity of the Resistance’s information. 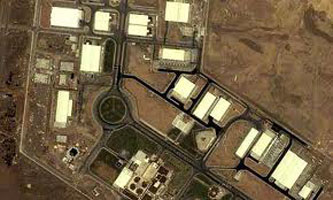 The Natanz site which is located 30 kilometers away frrom the city of Natanz is the regime’s most important uranium enrichment center.

In 1999, the regime started building this site under the guise of desert-reduction efforts. The project for building the Natanz site was entirely secret and the project’s budget was provided by the Supreme National Security Council and placed under the control of the Budget and Planning Organization. According to the February 2004 report of the regime’s parliament’s center for research, even the regime’s parliament was not informed of the heavy water project at Arak and Natanz2.

This project was entirely clandestine and its existence became public only when the Iranian Resistance exposed it in 2002.

The project for building this site was given to a number of trusted companies that were attached to the IRGC and each one of these companies was only aware of the information related to their part of the project, and unaware of the goals of the entire project.

These halls are built 10 meters below the ground level and are topped with reinforced concrete and soil to be protected frrom air attacks.

According to the November 2012 report of the IAEA, until November of 2012, 10,414 centrifuges were installed at that location and 7,611 kilograms of 5% enriched uranium were produced at that site.

The Kala Electric Company was responsible for putting the Natanz site into operation on behalf of the AEOI.

The AEOI and Defense Ministry experts are continually overseeing the progress at Natanz site.

This site’s equipment and facilities were built by using technology frrom China, India, and North Korea, and the site’s managers have had repeated trips to those countries.
In 2007, the regime started building secret tunnels several kilometers away frrom the site in order to make the site accessible frrom  underground.

The Kala Electric company, falsely registered as a clock factory, is one of main suppliers of the Natanz site and carries out the centrifuge deployment and testing there. The CEO of this company is Dr. Seyed Jaber Safdari of Iranian Atomic Energy Organization

One of the Kala Electric’s centers is at the Abali site in Tehran.

The Abali site contains two large 450 square meter halls that are used as workshops and has a few administrative offices.
This site was exposed by the Iranian resistance in February 2003 and subsequently inspected by the International Atomic Energy Agency (IAEA) in August 2003. Traces of highly enriched uranium were found at the equipment used at the Kali Electric during IAEA inspection.

Before the IAEA inspectors arrival, the Iranian regime unsuccessfully attempted to clean up the place, and renovate and re-paint its top floor. But when examining a section that was not completely renovated, the IAEA inspectors were able to detect highly enriched uranium.