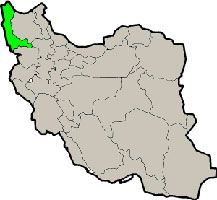 NCRI – Activists of the Iranian resistance inside of Iran have identified one of the key elements of suppression in Western Azerbaijan province. Colonel Jahangeer Nemat of Revolutionary Guards Corps (IRGC)  is Deputy for protection and intelligence and also operations officer in Western Azerbaijan. He is  aged around 50, from the village of Mohammadyar in Naqadeh.

IRGC Colonel Nemati is also the head of a totally secret detention center of the IRGC in this province called ‘Ramadan 81’.

Most political activists in Western Azerbaijan are transferred to this gruesome torture center upon their arrest, where they endure long, brutal physical, psychological and sexual torture. Prisoners are subsequently transferred to the Ministry of Intelligence and Security prison and then to Urumiyeh or other prisons in the province.

Ramadan 81 prison is situated between the Al-Mehdi garrison and the Hamzeh Seyed Shohada IRGC Corps base.
It is managed by interrogators from the IRGC ntelligence.

Jahangeer Nemati has been involved in suppression, torture, murder and fabrication of dossiers against people, especially political prisoners, since the 1980s.  He is a boxer and strikes political prisoners in the face and sensitive parts of the body during tortures at the Ramadan 81 detention center.  Many prisoners have become unconscious during  torture and gone on to suffer life-long effects, including chronic diseases.

The fabrication of dossiers against political prisoners, especially against IRGC intelligence staffers that are no longer prepared to continue their cooperation and their spying activities for the regime, is carried out by Col Nemati.

In order to exert more pressure on the political prisoners, head henchman Jahangeer Nemati also intimitaes or entices the spouses of political prisoners to get a divorce, and in this way, he has so far destroyed numerous families of these prisoners.