The Iranian regime’s nightmare: A revolt by the poor 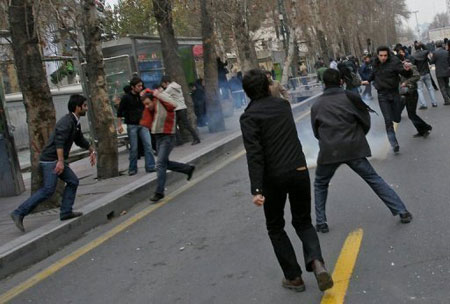 NCRI – A body representing the Iranian regime’s Supreme Leader in the Revolutionary Guards Corp (IRGC) has warned of a looming crisis during the forthcoming presidential elections and is preparing its own forces and Bassij paramilitary forces for a crackdown.

The board members of the IRGC’s political bureau – called the IRGC Guiders – are responsible for briefing members of Bassij and IRGC, and have received an internal directive to alert those members to two important developments during the elections that start on June 14, 2013, which are:

1. “Engineering” the elections results so that the Supreme Leader Khamanei’s favourable candidate receives the highest votes.

2. Readiness for anticipated social uprisings, especially in June 2013 when the election will take place.

The internal directive states: “The Islamic Republic faces three challenges;  the nuclear standoff, economic sanctions and their consequences, and the political situation in the country aggravated by seditious individuals.  These three challenges will feed off each other and will bring about a security crisis.

“For the nuclear challenge, we have no way forwards and no way backwards. If we give in, the West will move forward to impose further conditions such as respect for human rights and no repression.  If we agree to that, the uprising will sweep us aside.  If we do not agree, they will intensify the sanctions.  We are already in the midst of an economic crisis and there are still more sanctions to come in February.

“The sanctions coupled with the mismanagement in the government are already causing an economic crisis. The members of Bassij and IRGC are aware of the resulting inflation.

“The seditious supporters and the deviant groupsare are an obstacles and further fuel the crisis. That is why the supreme leader declared that if the heads of the three branches of the government publicize their differences, it will be viewed as treason.  Nevertheless, Ahmadinejad requested a report from the Majlis. If the supreme leader had not interfered, one wonders how it would have ended. The supreme leader had a private meeting with Ahmadinejad and Ali Lairjani on January 15 and warned that he had asked for an end to animosities. And that is why Ahamdinejad’s next meeting ended uncontentiously . Nevertheless, the seditious and others keep uttering the words ‘free elections.’

“We are thus confronting a crisis where we have to deal with economic sanctions and with the situation created by seditious and deviant groups. The social crisis could lead to a security crisis, but this time, unlike the seditious movement, we will be facing a movement by “barefoot and miserable” [the very people] that, contrary to the seditious movement, we will not be able to easily remove from the streets. And that is the reason why the IRGC Guiders and Bassij should be ready for such circumstances.”

Previous article(PHOTOS) Iran: Hand amputation of a man in Shiraz in public
Next articleIranian regime nuclear threat is getting closer, French FM warns