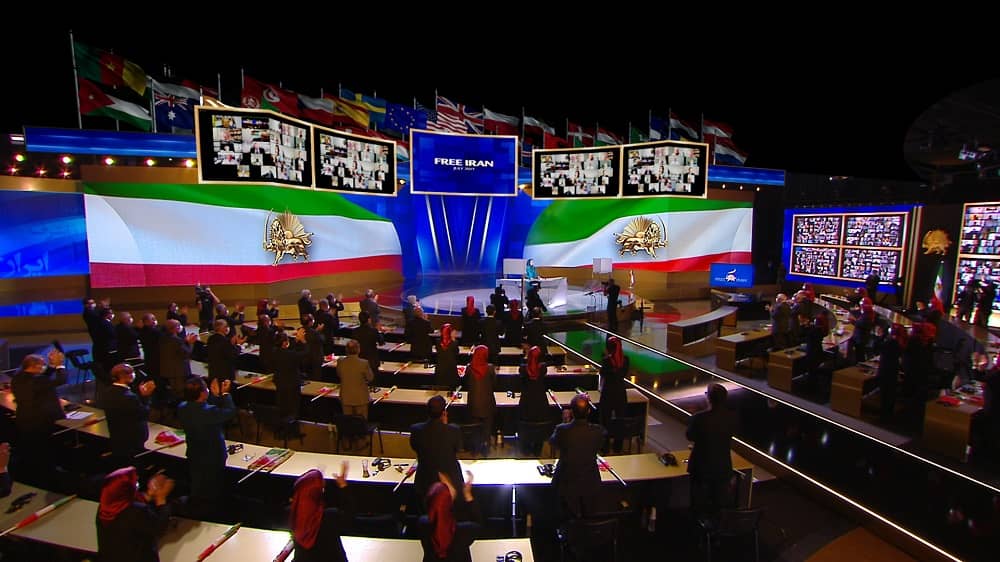 On Saturday, the Iranian opposition leader Maryam Rajavi spoke to a global audience at the outset of a three-day summit on Iranian affairs in the Free Iran World summit.

The summit serves to reiterate the activist community’s understanding of what that transitional government will look like, as well as how close at hand they believe it to be. Accordingly, Mrs. Rajavi’s speech restated many of the principles of her 10-point plan for the country’s future, including commitments to “the right to autonomy for all oppressed ethnic minorities within the framework of Iran’s unity and territorial integrity,” and “just relations based on respect for independence, national sovereignty, and mutual interests with its neighbors and the world.”

The speech also underlined the recent growth in the popular embrace of the NCRI’s plan, as promoted to the general public by a vast array of activist groups spanning Iran. “Our power comes from a nationwide network of Resistance Units who have been working all days of the year,” Mrs. Rajavi said, adding that in 2020 they “doubled the number of their activities and operations.”

Among the speakers at the Free Iran World Sumitt on Saturday were former US Secretary of State Mike Pompeo, former Canadian Prime Minister Stephen Harper, and a number of currents and former government officials representing the United Kingdom, France, Italy, Poland, and so on.

.@mikepompeo: Iranians want to prosper in their faith and protect their families – this is as true in Tehran as it is in Los Angeles, Austin, Nashville or Kings Point. #FreeIran2021 https://t.co/aUQxqYJNQa

Mrs. Rajavi also said, “As far as the international community is concerned, we ask it to recognize the struggle of the Iranian people to overthrow this regime,” she said, before stating that the regime “must be subjected to international sanctions under Chapter Seven of the UN Charter” and urging the UN Security Council to “arrange for the international prosecution” of leading regime officials on charges of perpetrating crimes against humanity.

Chief among those officials is Ebrahim Raisi, who is poised to become the new president of the regime next month after having served approximately two and a half years as head of the judiciary. During that time, Raisi oversaw Iran’s worst crackdown on dissent in recent years. After protests broke out across nearly 200 cities in November 2019, authorities immediately opened fire on the crowds, killing over 1,500 people. Afterward, thousands of political detainees were tortured over a period of months, as detailed in an Amnesty International report titled “Trampling Humanity.”

Raisi has never faced accountability for his participation in what has been called the “worst crime of the Islamic Republic,” a massacre of political prisoners that claimed over 30,000 victims in the summer of 1988.

Public awareness of Raisi’s record led to countless protesters condemning him as the “henchman of 1988” after his presidential candidacy was announced. This in turn seems to have set the stage for the widespread embrace of an electoral boycott which was promoted by the MEK’s Resistance Units in hundreds of locations for more than two months leading up to the June 18 election. As a result, voter participation on that day was the lowest in the history of the regime, even according to the regime’s own accounts.

Mike Pompeo referenced to this nationwide boycott in his speech on Saturday, in support of the conclusion that “the theocratic regime is at its most precarious state since 1979.”

“In short, very few people actually voted for Raisi,” he said before adding, “This election is heavily impacted by a series of major social upheavals, including 2017, 2018, and 2019 uprisings.” Many other participants in the summit similarly embraced the notion that the electoral boycott was effectively a continuation of those uprisings, and a sign of still more unrest to come.

Indeed, in her remarks at the Free Iran Summit, Mrs. Rajavi predicted that in the “new era” defined by the Raisi administration, “the hostility and enmity between the Iranian regime and society will intensify more than ever before.” More specifically, she underlined that this growth of unrest would take place not in spite of the regime’s efforts to consolidate power and step up its repression, but precisely because of it. Noting that the country’s presidency, judiciary, and supreme leadership are all in the hands of known human rights abusers, Mrs. Rajavi said, “The combination speaks for itself and hardly requires any other proof to indicate that the regime is in its final phase.”

She and various other contributors to the Free Iran World Summit pointed to this consolidation of power as a sign of the regime’s mounting desperation. This in turn was used as evidence of the practical as well as moral justification for Western governments adopting more assertive policies toward the mullahs’ regime. “We must continue to support the Iranian people as they fight for a freer and more democratic Iran in any way that we can,” said Secretary Pompeo, adding that as long as this support is sufficient to promote the further growth of popular unrest, “the Iranian people will have a secular, democratic, non-nuclear Republic.”

Previous articleIran: Co-Chairs of the Bipartisan U.S. Congressional Iran Human Rights and Democracy Caucus write to The US President To Lead An International Investigation Into Ebrahim Raisi’s Involvement In The 1988 Massacre
Next articleIran: Coronavirus Death Toll Exceeds 329,800