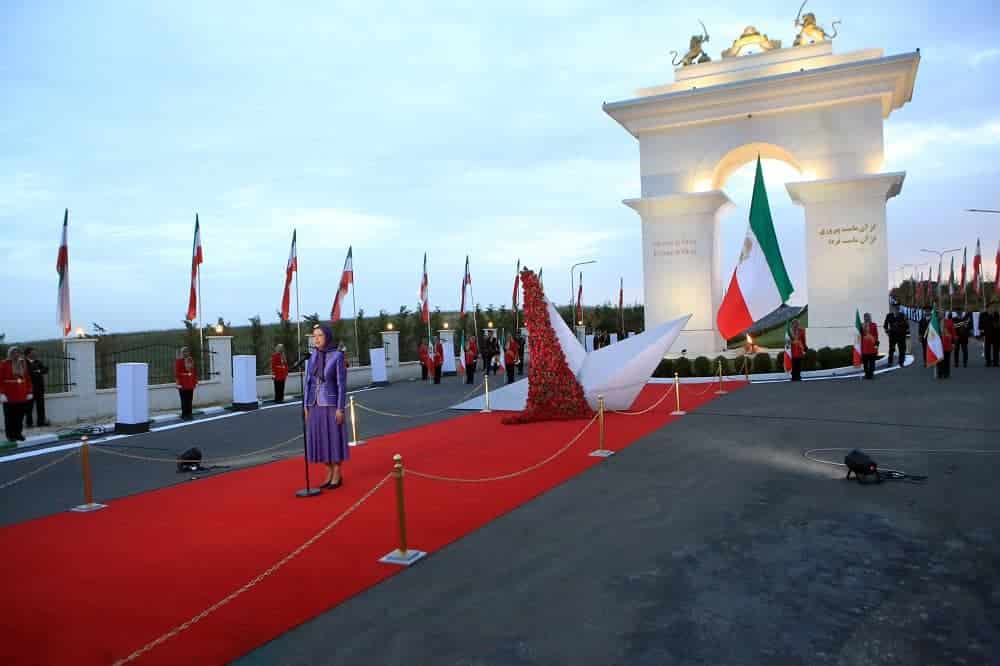 The Iranian Resistance held its annual “Free Iran” gathering on July 10-12. This largest-ever online gathering connected 50,000 locations, including dozens of in-persons rallies, to Ashraf 3, home to the Iranian opposition members in Albania. Over 1000 political dignitaries attend the “Free Iran World Summit.” The Iranian regime also reacted to this gathering, expressing its utter fear of the organized Resistance movement.

Mike Pompeo, the former Secretary of State of the United States, and Janez Janša, the Prime Minister of Slovenia, were among the Free Iran 2021 Summit speakers.

Raisi has played a key role in the 1988 massacre of over 30,000 political prisoners, mostly members and supporters of the People’s Mojahedin Organization of Iran (PMOI/MEK).

Saeed Khatibzadeh, the regime’s Foreign Ministry spokesperson, verbally attacked the political dignitaries who participated in the Free Iran gathering and threatened them. He mainly accused Secretary Pompeo of lying.

“Some Western leaders and officials have exposed their hypocritical approach by attending and giving speeches at the MEK’s gathering. They have once again shown that the seemingly beautiful slogans of the West in defending human rights and fighting terrorism are valid as long as they won’t overshadow their interests,” the official IRNA news agency wrote on Monday.

The regime’s state-run media also reflected the regime’s anger and fear of the Iranian Resistance.

“The MEK claims that its supporters virtually participated from 50,000 locations in 105 countries in this event, along with 1029 political delegations from five continents. Some of the western media outlets covered this event, calling it ‘the gathering of Iran’s exiled opposition’ without referring to the MEK’s history of violence toward the Islamic republic,” wrote the state-run Etemad daily on July 12.

Etemad then quoted Secretary Pompeo saying, “In the end, the Iranian people will have a secular, democratic, non-nuclear Republic, I pray that this day will come soon and with the support of Iranians living all around the world – and those who resist from within — that day will come sooner. I am committed to this cause; I know you all are too. May your mission be blessed and protected. May the Iranian people be blessed.”

The regime’s media mainly reflected the regime’s fear of calls made at the Free Iran summit to increase pressure on the regime.

The state-run Asr Iran  on July 12 quoted Secretary Pompeo as saying, “We cannot shower the Ayatollah with money and economic benefits in the hopes that he won’t use it to inflict terror.”

SNN quoted Prime Minister Harper as saying, “Shame on any government in the world that would sit down and try to negotiate anything with an administration led by Ebrahim Raisi.”

The Free Iran gathering once again showed the Iranian Resistance’s dedication to the cause of freedom and regime change. The regime’s fearful reactions showed the impact of this gathering on the Iranian society and the balance of power in Iran. In a nutshell, the Free Iran gathering was another crushing defeat for the mullahs’ regime, following the major boycott of the regime’s sham presidential election, and amid the growing calls for regime change inside Iran.