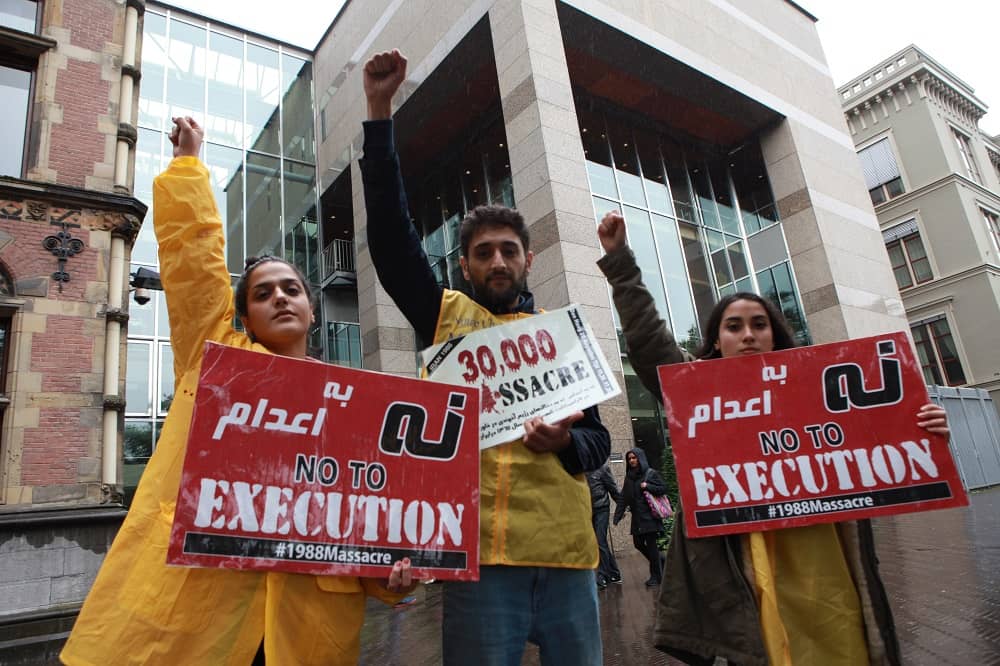 Friday marked International Human Rights Day. While many countries are taking serious steps to improve their human rights situations a number many appealed to the international community to take concrete steps toward holding the Iranian regime accountable for its increasing human rights violations.

Diana Eltahawy, Amnesty’s deputy director for the Middle East and North Africa, stated that Iran “suffers from a deepening human rights crisis, with hundreds of individuals on death row following unfair trials — including those arrested as children — and thousands persecuted or arbitrarily detained for peacefully exercising their human rights.” The human rights advocacy group has previously suggested that this situation is being fueled by an expectation of impunity on Tehran’s part, which in turn is largely attributable to the relative silence of Western policymakers on various key issues.

The international community’s response to the Iranian regime’s June sham presidential election is a prime example of that silence. The Iranian Resistance condemned the European Union in August for sending a delegation to attend Ebrahim Raisi’s inauguration. This move was an affirmation of Raisi’s legitimacy although most eligible Iranian voters had boycotted the election in protest.

Amnesty International seemed to acknowledge Raisi’s appointment as overriding the will of the Iranian people when it released a statement the day after the election, lamenting that Raisi had “ascended to the presidency instead of being investigated for the crimes against humanity of murder, enforced disappearance, and torture.” This, the statement said, was a “grim reminder that impunity reigns supreme in Iran.”

Earlier on Tuesday, about 100 MEPs also issued a statement urging their own governments and the EU as a whole to formally hold Tehran responsible for a major crime against humanity carried out in the summer of 1988. The call to prosecute Raisi for crimes against humanity was repeated by dozens of MEPs in an international conference on Tuesday.

.@STRUANSTEVENSON: The JCPOA is dead in the water. @JosepBorrellF would be well advised to abandon his policy of appeasement of this repressive regime & turn his attention to providing EU support for Iran's people who long for freedom#Standup4humanrightshttps://t.co/Md9LdHQQtb

The statement and conference underlined that Raisi was a member of the Tehran “death commission” that played a leading role in that massacre. For about three months, Raisi served as one of four officials who interrogated political prisoners, focusing on those affiliated with the People’s Mojahedin Organization of Iran (MEK), and issued death sentences to those who refused to disavow their affiliations. Nationwide, around 30,000 political prisoners were killed in the way, with the MEK supporters accounting for more than 90 percent of them.

In previous conferences organized by the Iranian Resistance, legal scholars argued 1988 massacre was not only a crime against humanity but also an instance of genocide, is based on a fatwa that labeled the MEK supporters as the enemies of God and signaled a goal of stamping out all advocates for a moderate, pro-democratic interpretation of Islam. As it stands, the regime’s theocratic fundamentalism upholds a system of “justice” that is still largely defined by the brutality on display around the time of the 1988 massacre.

This was confirmed in a court of law recently when a former Iranian prison official and servant of Raisi’s death commission, Hamid Noury, spoke in his own defense at a trial being conducted in a Swedish district court. Noury was arrested in 2019 upon visiting the Scandinavian country and was later indicted with war crimes and mass murder over his role in the massacre. His trial began in August and is expected to conclude in April. It has already featured testimony from around two dozen of the massacre’s survivors, each of whom reported having direct interactions with the defendant.

Noury’s own statements to the court largely consisted of outright denials that the massacre took place, as well as claims that he was on leave at the time when it was alleged to take place. But despite his seemingly desperate attempts to deny responsibility for that particular crime, Noury openly acknowledged many of the underlying human rights abuses, including the punishment of dissent and rule-breaking with months-long periods of solitary confinement and horribly brutal floggings. At one point he described the system behind those punishments as a “holy system,” the principles of which remain in place to this day.

The MEPs reiterated their expectation on Tuesday that the Noury trial will kick-start a broader inquiry into human rights abuses in general and the 1988 massacre in particular. The Resistance movement has repeatedly urged the United Nations to open a commission of inquiry with the aim of setting the stage for the prosecution of Raisi, the regime’s Supreme Leader Ali Khamenei, and others at the International Criminal Court.

These appeals precede Raisi’s presidential inauguration by many years, but they have grown more imperative in the wake of that development. Appointing the “butcher of 1988” to the presidency would spur an upsurge in human rights abuses, and over the past few months, the evidence appears to have borne this out.

In the five months preceding the June sham presidential election, Iran averaged 26.6 executions per month, but between July and November, the average jumped to 35.6, signaling an acceleration of the judiciary’s efforts to intimidate the public and to crackdown on dissent. Those efforts were also evident in the regime’s response to various protests over the past six months, some of which were launched directly in response to Raisi’s “selection” while others focused on issues such as government mismanagement of water resources and the economy.

In recent days, protests led by farmers in Isfahan led to 100 people being wounded and 300 arrested when security forces opened fire with supposedly “less-lethal” projectiles. Several victims were blinded in at least one eye after being shot at close range, and the Iranian public quickly responded with a social media campaign that featured activists wearing eye patches to express solidarity and call attention to the abuses.

Similar attacks on protesters have been reported in other regions as well, and Raisi played a role in all these atrocities. Prior to assuming that office, Raisi served for over two years as the head of the judiciary, and beginning in November 2019 he oversaw key aspects of the worst single crackdown on dissent in years. In response to a spontaneous, nationwide uprising that month, security forces opened fire on crowds of protesters, killing 1,500. For months thereafter, the judiciary oversaw a campaign of systematic torture against suspected participants. Details of that campaign were reported in an Amnesty International report titled Trampling Humanity.

This is arguably imperative in light of the fact that, even as other crackdowns are just emerging, repression of the November 2019 uprising does not yet seem to be at an end. This was made especially apparent last week when a 48-year-old activist named Abbas Daris was sentenced to death while his brother, 28-year-old Mohsen Daris, was given life in prison. The sentences ostensibly relate to the killing of a security officer who was on the scene of the 2019 protest in Mahshahr. But physical evidence points to the victim’s death being an instance of friendly fire by another officer, while the brothers’ convictions relied on false confessions elicited through torture.

UN human rights experts, including the special rapporteur on the situation of human rights in Iran, have released various statements and reports expressing concern about this phenomenon and a laundry list of other irregularities in the Iranian regime’s criminal justice system. Those experts have also called for the immediate halt of executions in Iran, especially those that appear to stem from proceedings that lacked due process.

In 2020, at least 255 executions were carried out across Iran, and so far 2021 that number stands at more than 330. These figures are only estimates, and that the real number of state-sanctioned killings is most likely much higher. Tehran is notoriously secretive about legal proceedings, and only a fraction of each year’s executions are actually reported by the regime. The other known examples are confirmed by activist networks with sources inside the prison system, but there is no guarantee of them being made aware of every hanging.

The regime’s persistent secrecy will no doubt is a product of the international community’s failure to seriously challenge it. As the Iranian Resistance conference emphasized, the regime should be compelled to act differently by world powers making all economic and diplomatic relations with the regime contingent on a reversal of its malign activities.