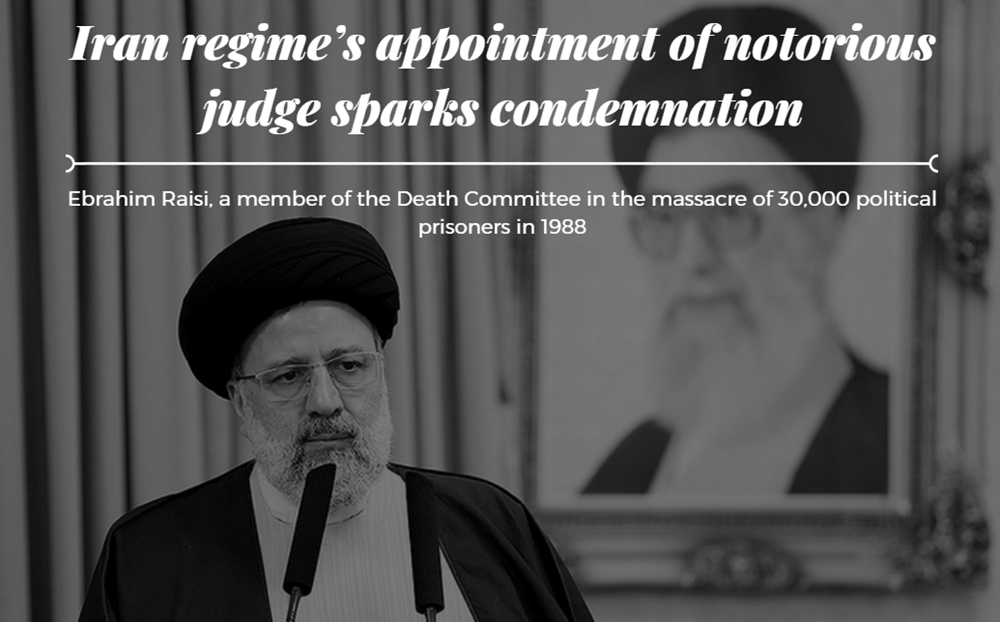 The appointment of Ebrahim Raisi as the head of the Iranian judiciary last week was met with condemnation from human rights groups, foreign politicians, and the Iranian Resistance, who all pointed to Raisi’s role in the 1988 massacre of 30,000 political prisoners as one of the reasons that he should have been instantly disqualified from office.

The National Council of Resistance of Iran has long sought to increase international attention towards the massacre, which largely targeted members of the NCRI’s main constituent group, the People’s Mojahedin Organization of Iran (MEK/PMOI), in order to get an independent investigation into the crime against humanity.

Raisi’s appointment is yet another example of how human rights abusers in Iran are not punished, but protected and promoted by the Regime, while facing no international repercussions. However, it also shows how the Iranian Regime is lurching toward increased repression of the Iranian people.

The NCRI advised that the appointment of the hardline judge and former presidential candidate proves that Supreme Leader Ali Khamenei has once again found no solution to the crises plaguing Iran so turned to further repression and a more malign foreign policy instead.

The repression includes the separation of women and men in public, banning additional media outlets, halting internet access, and increased patrols of morality police. While the foreign policy includes terrorist plots on European and US soil, a military build up, provocative manoeuvres in the Persian Gulf, and ballistic missile tests.

1. widespread domestic unrest, with MEK-driven protests beginning in December 2017, has spread to over 150 cities and towns, and features protesters calling “death to the dictator”

2. increased international isolation, with Donald Trump pulling out of the 2015 nuclear deal, reimposing sanctions on the mullahs, and encouraging others to do the same

Yet despite the repression, the Iranian people continue to rise up, even while many have been killed, and the Regime is unable to crush their protests.

Ken Blackwell, the former United States Ambassador to the United Nations Human Rights Council, wrote: “The resilience of Iran’s activist community was on display here in Washington this week, as thousands of Iranian-Americans marched in support of the NCRI and its 10-point Plan for an Iran that is free, democratic, and nonnuclear. They sought to bring the message of Iran’s people to Washington. Simply put, they have had enough. They are strong. They are capable. And they’re determined to succeed in overthrowing this evil and illegitimate regime. They deserve moral and political support from the democratic nations of the world.”