Amnesty fears teenage offender to be executed in Iran soon 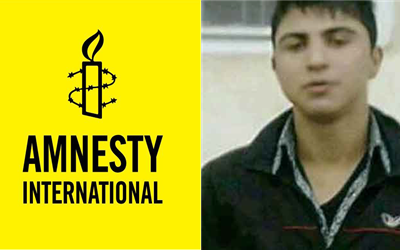 A young Iranian man, Himan Uraminejad, on death row in Iran for an offence carried out when he was a child, has been told that he will be executed soon after 1 April, Amnesty International has warned.

“Himan Uraminejad was sentenced to death in August 2012 after he was convicted of murder over the fatal stabbing of a boy during a fight, when he was 17,” the international human rights group said in an Urgent Action alerting its members on Thursday, March 24.

Himan is now aged 21, and on death row in Sanandaj’s Prison, western Kurdistan Province, where he has been told he will be executed after the Iranian New Year holiday period ends on 1 April, Amnesty said.

He was retried by Branch 9 of the Provincial Criminal Court in Kurdistan Province in June 2015, and sentenced to death again.

“In its ruling, the court ignored the absolute prohibition, in international law, on using the death penalty against people who were under 18 at the time of the crime, and the fundamental principles of juvenile justice that require all those under 18 years old be treated as children,” Amnesty said.

His sentence was confirmed by the regime’s Supreme Court in November 2015.

“The judicial proceedings that led to Himan Uraminejad’s conviction were unfair. He admitted stabbing the victim during the interrogations, which were conducted without a lawyer present. He is believed to have been tortured while he was held in a police detention centre (agahi): this included severe beatings that apparently left scars and bruises all over his face and body. His trial was held before an adult court, without special juvenile justice protections. No investigation is known to have been carried out into his allegations of torture and other ill-treatment,” the group’s Urgent Action added.

“As a state party to the Convention on the Rights of the Child (CRC), Iran is legally obliged to treat everyone under the age of 18 as a child. This is different from the minimum age of criminal responsibility, which is the age below which children are deemed not to have the capacity to break the law. This age varies between countries, but it must be no lower than 12 years, according to the UN Committee on the Rights of the Child.”

“The minimum age of criminal responsibility in Iran has been set at nine lunar years for girls and 15 lunar years for boys. From this age, a child who is convicted of crimes that fall in the category of hodud (offences against God carrying inalterable punishments prescribed by Shari’a law) or qesas (retribution-in-kind connected with a criminal act), is generally convicted and sentenced in the same way as an adult.”