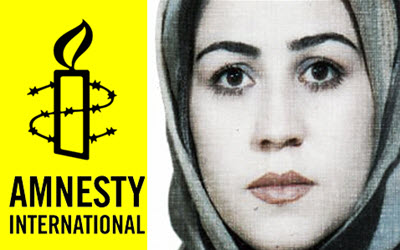 “The Iranian authorities must release Maryam Akbari Monfared immediately and unconditionally, and provide her with immediate and continued access to the medical care she needs outside prison and protect her from torture and other ill-treatment, which the denial of medical care can amount to, amnesty international also urges the Iranian authorities to  stop the harassment and persecution of families of the victims of 1988 mass executions and respect their rights to truth, justice and reparation, including by conducting a thorough, effective and independent investigation and bringing to justice those responsible in fair proceedings without recourse to the death penalty.” Amnesty International said on Thursday.

Prisoner of conscience Maryam Akbari Monfared, who is serving a 15-year sentence in Tehran’s Evin Prison, is being denied access to medical treatment. She is facing reprisals after filing a formal complaint that seeks an official investigation into the mass killings of political prisoners, including her siblings, in the summer of 1988.

Iranian officials are refusing to take prisoner of conscience Maryam Akbari Monfared to her scheduled medical appointments outside prison in order to receive treatment for her rheumatoid arthritis and thyroid problems. The Associate Prosecutor (dadyar) of Evin Prison told her family on 24 October that her medical care arrangements have been cancelled because she has become too “brazen” (por-rou).

The comment was made in reference to a formal complaint filed by Maryam Akbari Monfared from inside prison on 18 October, seeking an official investigation into the mass summary executions in1988 of an estimated 5,000 political prisoners, including her brother and sister, the location of mass graves where their bodies were buried, and the identity of the perpetrators involved. The denial of access to medical care follows other forms of reprisals against her, including an order from the Office of Prosecutor to stop prison visits from her family, and threats to bring fresh criminal charges against her.

Maryam Akbari Monfared was arrested in the early morning of 31 December 2009. For the next five months, her family remained unaware of her fate and whereabouts. In May 2010, she appeared before a Revolutionary Court in Tehran, which sentenced her to 15 years in prison on several charges including “enmity against God” (moharebeh) through membership in the banned opposition group known as the People’s Mojahedin Organization of Iran (PMOI). The judicial proceedings in her case were grossly unfair and the conviction was based solely on the fact that she had made phone calls to her siblings who are members of PMOI and had visited them once near the PMOI-run Camp Ashraf in Iraq. She was held in solitary confinement during the first 43 days after her arrest, where she underwent intense interrogations and was denied access to a lawyer throughout. She met her state-appointed lawyer for the first time at her trial, which was limited to one brief session. She was never provided with a reasoned judgement, setting out the evidence and legal reasoning relied upon to convict her. Maryam Akbari Monafred’s husband has said that during her trial session, the judge told her “she was paying for the activities of her brother and sister with the PMOI”. Her appeals were dismissed in a summary fashion with no reasons provided.