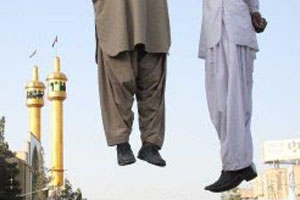 The two prisoners were identified as Saeid Ganji and Firouz Nouri-Majd.

Ganji, Nouri-Majd and at least one other prisoner in Qezelhesar Prison were transferred to solitary confinement on Sunday in preparation for their execution, and their relatives were contacted to meet with them in the prison for a final time.

There are reports that the number of prisoners awaiting imminent execution in the jail could in fact be higher.

Another 10 death-row prisoners in Iran have been transferred to solitary confinement in preparation for their execution.

Nine prisoners, being held in a detention center in Karaj, west of Tehran, were transferred to solitary confinement on Saturday in preparation for their execution. On Sunday, their relatives were told to come to the jail to meet for a final time with their loved ones.

At least 18 prisoners have been executed in Iran in the past six days.

On Thursday, Amnesty International said that the Iranian regime has executed an astonishing 694 people between January 1 and July 15, 2015.

“Iran’s staggering execution toll for the first half of this year paints a sinister picture of the machinery of state carrying out premeditated judicially-sanctioned killing on a mass scale,” it said.

Since mullah Hasssan Rouhani took office as President, more than 1,800 prisoners have been executed in Iran.