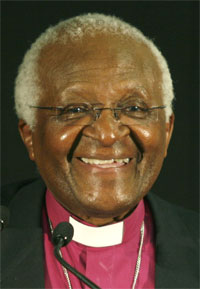 NCRI – The Most Reverend Desmond Tutu, Archbishop of Cape Town, South Africa and recipient of the Nobel Prize for Peace (1984), sent a message of hope for participants in June 26 Paris rally of Iranians and underlined the need to struggle for justice saying, “the struggle itself is the gift of human rights. That struggle never should end because the struggle itself is tangible evidence of our human rights and dignity.”His message follows:

A Statement of Support for Human Rights in Iran

My dear brothers and sisters:

Although I cannot be with you today as you gather in Paris, I have asked that this message of hope be shared with you.

In Iran today that struggle for human rights and dignity has re-awakened.  In spite of great dangers, the Iranian people are telling their leaders and the world that they want to re-establish their rightful place as those who believe in and stand for human rights, justice and peace.

In a proud to stand with my fellow Nobel Laureates and countless others inside and outside Iran to call upon the government of Iran to respect and actively enhance the human rights of all Iranians, to work for peace and justice inside Iran and to work with other nations and peoples to bring peace and justice to a broken world.

I am a Christian.  I work proudly with Buddhists, Hindus, Jews and Muslims to seek the realization of all that our respective faiths count as good and holy.  I hope and pray that those of you who gather today in Paris may light a lamp of human rights, human dignity and human justice that will shine brightly throughout all the nations.

Previous article
John Bolton: “We will not tolerate interference in Camp Ashraf”
Next article
Lloyd’s restricts cover for petroleum shipments to Iran