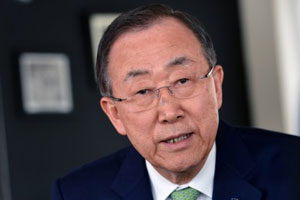 U.N. Secretary-General Ban Ki-moon has asked the Iranian regime to release all political prisoners and journalists including the Washington Post’s reporter and his wife who are being held in Iran.

Ban Ki-moon said in an interview that he spoke with the Iranian regime’s foreign minister in a closed-door meeting on Thursday on the sidelines of the U.N. General Assembly session.

Ban said that he brought up the case of the two detained journalists and urged Javad Zarif not only to release the two reporters, but also to free other political prisoners in Iranian jails.

“Why don’t you release them?” he recalled asking the Iranian diplomat, during an interview in his 38th-floor office atop the U.N. headquarters building.
“I raised this issue of the two persons who are still in prison and expressed my serious concern about human rights issues, particularly those people, and urged their government to release all remaining political prisoners.”