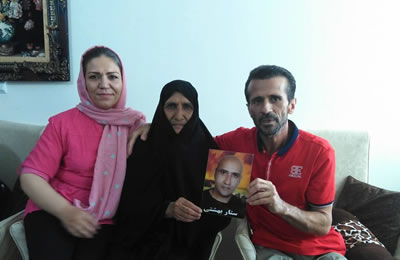 NCRI – Sattar Beheshti was a blogger who criticized the mullahs’ regime, and was arrested by the Iranian cyber-police on October 30, 2012. His mother, Gohar Eshqi lost her son after he was tortured on November 3, 2012. The prison guard, his killer, was sentenced to just three years in prison and 74 lashes. Sattar’s mother decried this verdict, saying, “I do not recognize this court. My child was killed under torture. This verdict will encourage other murderers.”

Sattar Beheshti’s mother met last week with newly-liberated union activist Jafar Azimzadeh, whose 63 day hunger strike sparked intense social and international pressure on the mullahs’ regime, and forced his recent release from prison. When Mrs. Eshqi first met Jafar she stated, “When I saw Jafar, I felt like as if my son, Sattar, had been released from prison. Far be it, the zeal of the rulers of a poor country.”

Mr. Azimzadeh had been serving a six-year sentence in Ward 8 of Evin Prison. His health was considerably deteriorated after two months of protesting the “violation of the fundamental rights of teachers and workers,” as well as “their detention and prosecution for bogus reasons” and raising charges such as “acting against security” against labor activists and teachers.

Sattar’s mother appreciated the resistance and the courage shown by Mr. Azimzadeh’s 63 day fast. Mrs. Eshqi said “I cannot easily describe this Friday’s meeting. It might be better to be the voice of the silent by releasing photos.”

While he was on hunger strike in prison, Mr. Azimzadeh was told by the regime’s representative in the public prosecutor’s office that nothing would be done to prevent him from losing his life if he continued with his hunger strike. However, on Wednesday, June 29, the National Council of Resistance of Iran (NCRI) reported that hundreds of workers, teachers, and youths had rallied outside the office of the Iranian regime’s president Hassan Rouhani in Tehran earlier in the day in support of Mr. Azimzadeh, demanding urgent action to save his life. He was released on Friday, July 1.

As true today, as when Mrs. Eshqi said of her son’s murder, “Iran’s penal code is based on inhumane punishments and torture and the regime’s leaders should be prosecuted and brought to justice through the international courts.”

On July 9, in Paris, a major gathering of Iranians and their international supporters for the cause of democracy and freedom in Iran – “Free Iran” – will highlight the plight of Iran’s political prisoners.