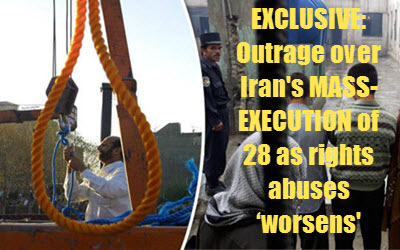 NCRI – Britain’s Express has published an interview with a former Iranian political prisoner who has recounted the suffering he endured and the cases of mass executions that took place by the mullahs’ regime. The following is the text of the article which was published on Thursday:

EXCLUSIVE: Outrage over Iran’s MASS-EXECUTION of 28 as rights abuses ‘worsens’

IRAN must put an immediate end to the hanging and torture of political prisoners following the mass execution of 28 men, an activist has demanded.

The shocking killings by the Islamic Republic come a week after the Foreign Office said Iran’s human rights abuses are getting worse.

Rights campaigner Ahmad Ebrahimi, who was born in Iran but now lives in London with his son, lost many close friends and family members at the hand of the “tyrannical” Iranian regime.

He warned the international community must become more involved and help put an end to deaths, which he believes have seen an increase in the last 10 years.

His comments come as 28 Sunni prisoners were suddenly executed before their families could even say goodbye – just days after a report into human rights abuses claimed the situation “has worsened”.

Despite Iranian President Hassan Rouhani promising to improve the freedoms of his people, the situation in the Middle East continues to anger activists.

An estimated 966 to 1,025 people were executed last year, the highest number in a decade, with 170 recorded executions in the first six months of 2016.

Now Ahmad Ebrahimi, the president of the former Iranian political prisoners association in the UK, says the barbaric punishment – which is even handed out for minor crimes such as drug offences – must stop.

During his time in Iran, Mr Ebrahimi – who was himself a political prisoner for 10 years – personally watched as his friends were taken away to be killed.

He told Express.co.uk: “Being in prison was just everything horrible, from their care of the political prisoners to whatever I saw – the abuses I saw there.

“We lost many friends, noticed the people disappearing. People were called and taken from their cells and, we learned after, went to their so-called court.

“Then the people would come back to their rooms, to their cells, and when they were called again they were taken to be executed. With bullets.

“We counted the bullets after, to see how many lives had been taken.”

The father-of-one was just one of thousands of prisoners locked up for their support of leftist factions, such as the People’s Mujahedin of Iran, and was inside during the 1988 mass executions in which as many as 30,000 dissidents mysteriously disappeared.

After 10 years inside, Mr Ebrahimi was later released and fled to Britain to begin a new life with his family – saying he chose the UK because he wanted his children to have a “high standard” of human rights after years of having his own abused.

Now he fights against the Iranian regime, campaigning for more to be done from around the world to overthrow the government.

Mr Ebrahimi, whose son is currently studying for his A-levels in London, said: “It’s disgusting, it should not happen and it must not.

“People should know what is going on in Iran, the hanging, the abuse, the executions.

“There is much media coverage of the middle east – Iraq, and Syria – but less about the human goths in Iran.

“We do not want this government, and we want people to know that.”

His comments come as Iran’s notorious Gohardasht Prison in Karaj, north-west of Tehran, is believed to have conducted a mass execution of 28 Sunni prisoners on Tuesday.

Their families had been told to go to the prison before 3pm on Tuesday to visit them for a final time – but when they arrived were informed it was “too late”.

One family was called on route to be told that they should instead collect the body of their loved one from the morgue.

Mohammad Mohaddessin, chairman of the foreign affairs committee of the NCRI, said: “The mullahs’ regime is facing absolute social isolation and widespread abhorrence by the people and thus is resorting to increased executions to create a climate of fear and to prevent the possibility of a nationwide uprising.

“More than 2,500 people have been executed in Iran under Hassan Rouhani, who falsely claimed to seek moderation.

“For as long as the mullahs’ regime is in power, there will continue to be further executions, torture and other crimes.”

Last month, hundreds of officials from around the world flocked to Paris for the annual Free Iran rally, lead by the NCRI – a France-based umbrella group for Iranian exiles living in Europe.

London MP Bob Blackman, who regularly attends the rally, told Express.co.uk: “There are concerning accounts of a rising tide of executions and politically motivated arrests in Iran, as well as undiminished sponsorship of terrorism and escalating Tehran’s involvement in the affairs of Middle Eastern countries including Syria, Iraq, Yemen, and Lebanon.

“I believe firm pressure must be put on the Iranian Government to comply with international demands to adhere to higher standards of compliance with regards to its nuclear programme and to also heed concerns from the international community about human rights abuses.”

Also this month, the Foreign Office released it’s latest report into the human rights progresses in Iran, saying that “in many respects, the situation has worsened”.

A spokeswoman said: “Iran’s human rights record remains a serious concern – in particular its use of the death penalty.

“We oppose the use of the death penalty in all circumstances, and are deeply concerned by the number of people executed, particularly in the case of juvenile offenders.

“We regularly raise human rights with the Iranians at all levels and we continue to work with the international community to press Iran to improve its poor record on all human rights issues.”