NCRI – Hendon’s MP is leading calls for the UK to condemn human rights violations in Iran, following a dedicated exhibition.

The exhibition at Attlee Suite in the House of Commons yesterday (October 20) showcased the Iranian authorities’ past and ongoing atrocities targeting all sectors of the Iranian society including activists and dissidents.

It was part of a conference set up by the British Parliamentary Committee for Iran Freedom (BPCIF) highlighting the human rights violations in Iran and commemorating the victims of executions.

The conference will especially focus on the state-sponsored 1988 massacre, which saw 30,000 people, including pregnant women and children, executed by religious decree from the government regime. 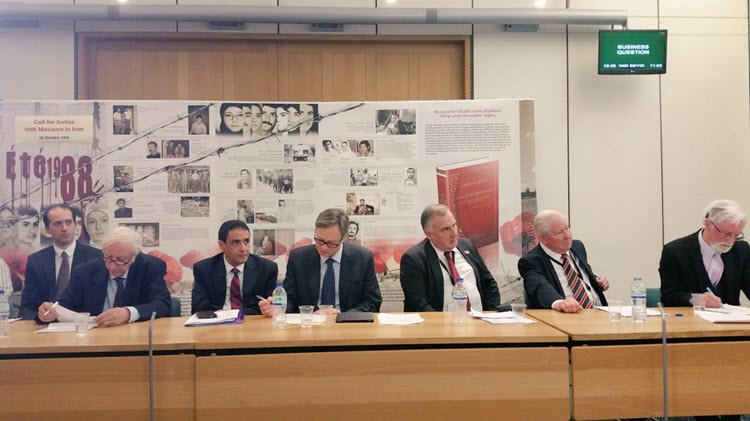 Matthew Offord, MP for Hendon, chaired the conference and pushed for an end to impunity for the people who committed these crimes.

He said: “The people of Iran want an end to the impunity for those who committed this crime and other authorities of the regime.

“I urge the British government to recognize and condemn this massacre as a crime against humanity and act in the UN Human Rights Council and the UN Security Council in order to bring the known perpetrators to justice in an international tribunal.”

His call on the government was echoed by the other members of both Houses who agreed that such steps would be significantly important to pressure the regime in Tehran to stop its executions, which continue today.

The conference is supported by the Association of Anglo-Iranian Woman which comprises of many Barnet residents of Iranian origin.

Laila Jazayeri, director of the association, said: “Almost every Iranian living in the borough lost a member of family, extended family or friend in the 1988 massacre.

“Some of the families of the victims and in particular a member of Anglo Iranian Youth in Barnet who lost several aunts and uncles.

“Our MPs, Matthew Offord and Mike Freer, have always supported their constituents’ goals and aspirations for a free Iran where they could to go back to one day.”

The public also heard from former political prisoners and eyewitness accounts from the survivors, and family members of the victims living in the UK.

They shared their ordeals and told their accounts of the brutality with which the authorities carried out the executions.

Previous articleIran wants “many billions of dollars” for American prisoners
Next articleMember of Iran Chamber of Commerce: We are Faced with a $15 Billion Smuggling